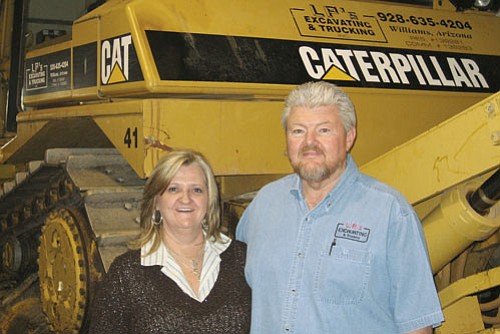 <br>Submitted photo<br> Larry and Lori Pittenger will celebrate 30 years of business in July of this year. The owners of L.P.’s Excavating were also recently named finalists for Contractor of the Year by Equipment World Magazine.

What started as a modest business for Williams locals Larry and Lori Pittenger did not stay that way for long. Most in Williams are familiar with the Pittenger family, who have called Williams home since 1988. What many may not realize, however, is that L.P.'s Excavating has grown from a small, family-run operation into a business 40 employees strong. The business itself has gone from home-based to a sprawling six-acre facility, complete with an office and 16,000 square foot shop.

The Pittengers were recently given national recognition after they were named a finalist for Contractor of the Year in the February issue of Equipment World magazine.

"When we started there was Lori and myself. Then Chad came and my son-in-law came when we got up here. They've been in the company with us 18 years. Now the family is in it, even my grandson," said Larry Pittenger.

On top of their recent honor, L.P.'s Excavating will also celebrate 30 years of business this year. The company first began in 1979 when the Pittenger family moved to the Phoenix area from Ohio. Prior to the move, Larry worked as a truck driver and farmer among other occupations. Lori worked as a restaurant manager and at various office jobs prior to their relocation to Arizona. Shortly thereafter, the family made the move to the Williams area, Larry said.

"We liked the area. It was nice coming up from Phoenix to relax and go fishing and just hang out. We had friends up here," he said. "When we first moved here Lori drove the truck and I did the pipe work."

Currently, L.P.'s Excavating works throughout northern Arizona, including recent jobs in Flagstaff, Prescott and other locations. The company can be seen at numerous jobs sites in Williams as well, where the business is based and where many of L.P.'s employees live. Those same employees have often been credited with helping volunteer time and equipment for the city as well.

"This is my town. We try to help where we can," Larry said. "There's just a ton of people in Williams that helped us reach these goals of ours. It's hard to thank all of them."

When it came to being named a Contractor of the Year finalist, both Larry and Lori said the honor was a big one for them.

"It's actually kind of hard for us to believe. There's no way we'd thought we'd make that," Larry said.

"The people that were there, that were named finalists with us, were just awesome," Lori said, adding that much of her and Larry's success comes from their family.

"We want to really thank our kids, because we wouldn't be where we are without them," she said.

Larry also credits a change to his lifestyle for helping ensure the company's longevity over the years. He quit drinking and dedicated his life to the Lord 18 years, which Larry said helped turn his business, and life, in a new direction. These days, Larry has also found time for one of his other loves in life - drag racing, where he has participated in a number of races throughout the southwest. The family also plans to visit Maine and Vermont later this year, though Larry said he has no plans to retire completely.

Letter: L.P.'s deserves huge congrats
2009 Williams Year in Review: Part IV
Larry Pittenger is putting Williams on the map one race at a time
For Williams resident Larry Pittenger life is one big drag
Sniffing out success with community support