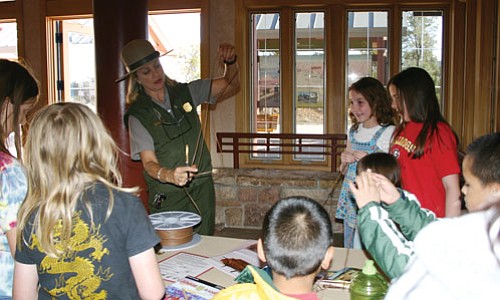 At Grand Canyon alone, more than 4,300 archaeological sites have been recorded to date. With only 4 percent of the park surveyed, according to Ranger Libby Schaaf, archaeologists estimate that there may be as many as 50,000-60,000 sites. The park's oldest artifacts date back almost 12,000 years, to the Paleo-Indian period.

Archeology Day, much like Arizona Archeology and Heritage Awareness Month, is intended to help people learn more about those who lived here long ago and to better understand the work that archaeologists do and what can be learned from their research.

"As visitors take part in these activities, we hope they will reflect on how Grand Canyon has been and remains a homeland and a sacred place to a number of American Indian cultures and it offers us an opportunity to consider the powerful and spiritual ties between people and this amazing place," Schaaf said in a podcast available on the park's Web site. "Grand Canyon National Park preserves not only spectacular scenery but also a connection to our human heritage."

There will be two special speakers. At 1:30 p.m., at Canyon View Information Plaza, Science and Education Outreach Coordinator Allyson Mathis talks about current archaeological excavations along the Colorado River. Park archaeologist Ian Hough will provide a special evening program, "Grand Canyon - The Human Story" at 7:30 p.m. at the Shrine of the Ages. The day will also feature special activities at CVIP between 11 a.m.-4 p.m., including making clay pinch pots and split-twig figurines as well as "sifting for artifacts," then trying to identify what is found and hypothesizing what it might have been used for.

Meanwhile, on Saturday from 2-4 p.m., Park archaeologist Amy Horn presents "Stories Among the Aspen: Ranching on the North Rim" in collaboration with the Forest Service. It will be at the North Kaibab Ranger District office in Fredonia.