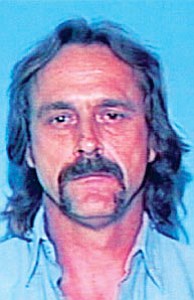 A Buckeye man remains in the custody of the Coconino County Sheriff's Office following a manhunt last weekend. Leigh Elson Parr, 54 was taken into custody March 22 without further incident.

At approximately 11 p.m. March 21, a Coconino County Sheriff's deputy's attempt to make contact with a suspicious vehicle resulted in a high speed pursuit on dirt roads. Eventually an exchange of gunfire between Parr and two deputies ensued.

The deputy was returning from a burglary report in West Wood Ranches, which is a subdivision within Coconino County located north of Ash Fork. As the deputy was driving southeast on West Seven Ranch Road he observed a vehicle with its lights off stopped on the side of the road and blocking a private drive. Due to the late hour and the residential burglaries that have been occurring in the area, the deputy pulled behind the vehicle and illuminated the interior with his spotlight. The deputy stepped out of his patrol car and as he was approaching the suspicious vehicle, the driver put the vehicle in reverse, striking the front of the deputy's vehicle.

Parr's vehicle left the area at a high rate of speed. The deputy pursued the vehicle on dirt and two track roads for approximately two miles at which time Parr struck a small group of trees. Parr was able to free his vehicle and the pursuit continued. Eventually Parr rolled his vehicle and was able to get out of it. At this point a second deputy arrived and Parr fired multiple gunshots at the deputies. The deputies returned fire and eventually Parr fled on foot.

At approximately 12:30 p.m. March 22, a concerned citizen called the Northern Arizona Regional 911 Reception Center to report that a white male with serious injuries was walking on a private parcel located off West Seven Ranch Road. CCSO deputies along with Arizona Department of Public Safety officers and a United States Forest Service officer responded to the area where Parr was last seen, approximately four miles north of the location where Parr rolled his vehicle. Officers made contact with Parr and ordered him to place any weapons he had on the ground. Parr complied by placing a handgun on the ground. He was taken into custody.

Parr was transported to the Flagstaff Medical Center where he is being treated for his injuries. CCSO detention officers are with Parr while he is at FMC to maintain custody. Parr faces charges of aggravated assault and felony flight.