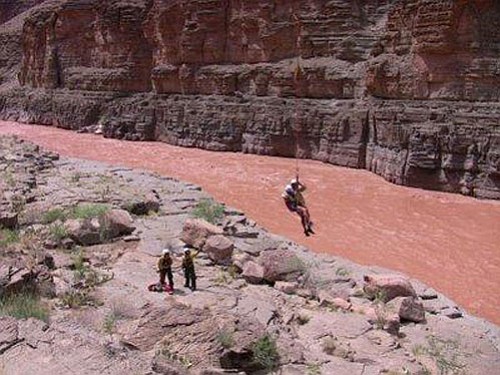 A screen capture from the August rescue. See the link below for the whole video.

Last month, at the Helicopter Association International Heli-Expo Awards Banquet, "Salute to Excellence", members of Grand Canyon National Park's helitack and search and rescue crews received the Igor I. Sikorsky Award for Humanitarian Service in recognition of their efforts during the short-haul rescue of 16 stranded boaters on Aug. 17.

In August of last year, Havasu Canyon, a popular side canyon of the Grand Canyon, flash flooded as a result of heavy, localized, monsoon rains. The flood waters necessitated the evacuation of almost 400 people from Havasu Canyon and the Village of Supai (located approximately 75 air miles west of Grand Canyon Village), and washed the boats of a private rafting party that had gone ashore downstream. A Grand Canyon National Park search and rescue team found the party of 16 rafters and guides stranded on a ledge more than 30 feet above the floodwaters at the confluence of Havasu Creek and the Colorado River.

The rescue team, consisting of a Papillon Grand Canyon Helicopters pilot, five members of Grand Canyon National Park's helitack crew and a park ranger/paramedic, used a short-haul rescue technique to move group members, two at a time, from the ledge to the shore of the Colorado River where they could get into the helicopter and be flown to Hualapai Hilltop for transport by bus to a Red Cross shelter in Peach Springs.

The Igor I. Sikorsky Award for Humanitarian Service is sponsored each year by Sikorsky Aircraft in honor of its founder, and is presented to the person(s) who best demonstrates the value of civil rotorcraft to society by saving lives, protecting property, and aiding those in distress.

According to the program for the 2009 "Salute to Excellence", the evacuation required, "precision flying under difficult conditions due to the tight canyon and the need to hover for prolonged periods in close proximity to the canyon wall."

According to Jay Lusher, Grand Canyon National Park's helicopter program manager, the need to work and land right next to rushing water only increased the challenges as the movement of the water can prove disorienting to pilot and crew.

Seven individuals were honored for their efforts during the rescue, Helicopter Program Manager Jay Lusher, Helitack Squad Leader John Yurcik, seasonal Helitack Crew Member Sean Naylor, seasonal Helitack/Paramedic Nate Becker, seasonal Helitack Ali Ulwelling, Ranger/Paramedic Brandon Torres, and Helicopter Pilot Bryce Barnett of Papillon Grand Canyon Helicopters. But according to Lusher,"it just says Grand Canyon Helitack on the award, but to us it includes our vendor (Papillon), ...all the people who work for them and all the people who work for the National Park Service. ...we see ourselves as one giant crew that works together to accomplish all the missions we have."

According to Interagency Unit Aviation Officer Michael Ebersole, "this is the most prestigious award received in the 36-plus year history of Grand Canyon National Park's aviation program...".  Congratulations Grand Canyon helitack and search and rescue crews and Papillon Grand Canyon Helicopters on a job extraordinarily well done.