Getting into the swing of things
Tourneys, wins and losses for Williams 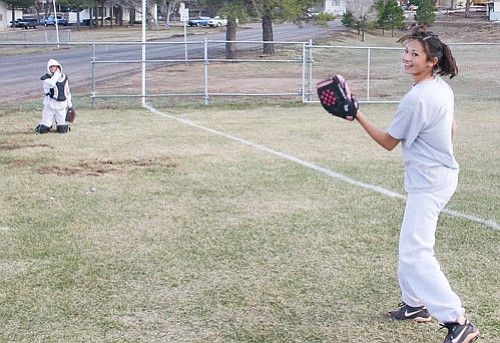 <br>Photos by Patrick Whitehurst/WGCN<br> Players in the Williams High School Vikings baseball and Lady Vikings softball team have kicked off the 2009 season with a number of recent games.

The Williams High School Vikings baseball team got a busy start to the 2009 season, having played in the recent Gila Bend tournament, as well as a number of non-region and region games. According to Coach Phillip Echeverria, a number of players came out for the new season of baseball, including four seniors. He said the team continues to work on their game as the season progresses.

"When we opened practice we had 30 kids come out for baseball, which I was impressed with," Echeverria said. "We returned all of our players, but three. We lost two to graduation and then one moved away. So we are looking to have a strong team this year, a competitive team, something that we can get back to the state playoffs and possibly go deep in the state playoffs."

"We returned another five starters, so there's a lot of experience there. We're hoping to get off to a good start," he said. "I changed our tournaments this year and we went to Gila Bend, at the beginning of the year, to possibly see some better pitching, because when we get to the state playoffs, we see quality pitching. Obviously we didn't hit it last year. We lost three to one in extra innings last year and so I'm trying to see quality pitching."

"Getting off the bus and getting on the field, there's no excuses, but I don't think we were ready to play. They're a quality team, probably in the top three or four schools in the 1A this year," Echeverria said.

Following the loss to Gila Bend, the boys turned around for a match against Tempe Prep. There the Vikes pulled off an easy 19-3 win. On the second day of the tournament, the Vikings went on to play Antelope from the 2A division. There the Vikes took another season loss with a final score of Antelope 5, Williams 4.

"We came out of bed just not ready to play I guess," Echeverria said. "We gave up four runs in the first inning."

The Williams boys went on to play Westwind Preparatory Academy, taking the win with a final score of Williams 19, Westwind 0. The win placed the Vikes in the Saturday tournament as the fifth seed, where they drew second seed pick Santa Cruz. Santa Cruz managed to pull the win against the Williams boys, winning the game with a final score of 12-0. The Vikes ended the tournament 2 and 3.

"Santa Cruz came out swinging the bats well," Echeverria said. "We swung the bats real poorly. They threw a no-hitter against us. We just weren't ready to hit."

On March 10, the Vikes traveled for a game in Sedona. Though it was a close game for Williams, the Vikes ended up taking a 7-8 loss against the Sedona team. The loss placed the Vikes at three wins and four losses for the season.

"We played a pretty decent ballgame. We were up three to zero going into the fourth inning and gave up six runs to them in the fourth and I think five of them were unearned runs," Echeverria said. "We had three or fours errors in that inning. We stayed in the ballgame, though, and battled. I was impressed by that. We hit a home run in the fifth and came back in the seventh and scored three to tie it 7-7 and gave up one in the bottom of the seventh. We swung the bats better against Sedona. We did strike out a lot, but there were some quality strikeouts, if you can have a quality strikeout, but we had some good at-bats there. If we progress there and swing the bats the way we're capable of, I think we got a chance of winning our region and getting back into the state tournament."

The Lady Vikings, meanwhile, have begun their season as well, according to Coach Frank Schulte, and have carried away 10 wins with four losses in the season so far, which includes the girls' participation in the recent Laughlin Tourney held March 13-14. Schulte said a total of 26 players came out for the Lady Vikes in their 2009 softball season.

"We have 26 players out for Varsity and JV softball this year including freshman, sophomores, and juniors," Schulte said. "Overall Coach Edgar Brown and myself are very optimistic about this season, the girls are working hard at practice and games. This is a young, exciting group of ladies, without too many holes in the key areas."

The next game for the Lady Vikes will be a home game on the fields of Williams High School March 24, beginning at 3:30 p.m., where they will take on Northland Preparatory Academy.