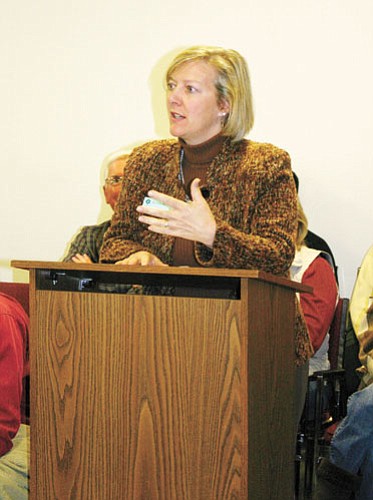 Leah Bornstein, president of Coconino Community College (CCC), is seeking input from the Williams community on the best way to utilize the Williams branch campus, located at the top of Seventh Street near Williams High School. Bornstein, who visits Williams once a month, spoke to members of Williams City Council, as well as members of the Williams Rotary Club, during her recent visit March 12. Bornstein outlined a plan to form a local committee, which she said may help steer the Williams campus in a more productive direction.

"I'm forming three broad, high level, strategic thinking, president advisory councils that are made from the communities, that are separate and distinct from the district governing board that has the statutory responsibility for governing the college," Bornstein said. "Invitations have gone out and I've received RSVPs."

CCC is currently seeing an 18 percent enrollment boost, which Bornstein called "fabulous" for the community college - as many residents are going back to school in the tough economy, either due to the loss of a job or to help ensure a better job in the future.

"It's the highest enrollment growth of all the community colleges in the state right now," Bornstein said. "Much of that is due to the economy and that's no surprise."

Bornstein also outlined a new program that allows students to enroll in classes at both Northern Arizona University (NAU) and CCC, without the hassle of transfer paperwork, during her recent visit with Williams City Council members.

"There's a program that you may be aware of that NAU and CCC has been working on for over a year now, since I walked in the door. Basically it started with the two senior management teams coming together and talking about how we can best serve our citizens," Bornstein said. "What we came up with is this program called CCC to NAU and what it does is that a student, or a learner at any age, who walks into CCC and hhas an inkling that at some point in their life they think they may want to go on to a four-year degree, even if it's not now. They are eligible to be part of this program. What that means is they are a CCC student and an NAU student at the same time. So they have a CCC ID card and an NAU ID card. They're taking classes at CCC, some of their classes, one or two of them, may be at NAU to help folks get used to what university life is all about. When it does come time for that person to move to the university, whether it's NAU or any of the other universtieis in the state. It's s simple transition from one location to another. There's no transfer of paperwork to do or anything like that. They just move from one to the next."

She said the CCC to NAU program was a big step for the two universities.

"Once we have it around for a few semesters, I think we can actually take it nationally as a national model," Bornstein said. "Last year, the fall semester, was our pilot semester. We had 30 students in it. This semester we opened it up a little more, fewer criteria, and we have an additional 120 students. We're now serving 150 students in that program. Both President Haeger of NAU and myself thinks that this has incredible potential to break barriers of transfer in higher education."

Williams City Council member Bill Milller said he would like to see a review of the Williams campus in order to come up with ideas on ways to improve usage on the campus.

"My concern is that we have a nice building that the college has here in Williams. We have a history of supporting the college ever since its inception," Miller said. "I hate to see it sit there and not be fully used. I'd like to see some focus on that. We've got fire training that can be done there, classroom training and things that have a more occupational, practical function."

"There's only so many people that go to computer classes and art classes," said Williams Mayor John Moore. "I think we have a lot of people, a lot officers in the area, DPS, sheriff, city. I'm certain that they would all take some law enforcement courses and do, but they have to travel to Flagstaff. The fire department has to travel all over the state to get their training, so I think it wouldn't hurt to look. Secondly, I don't think it's up to the city council and, or the community to say that these are the things that we think you need to do. I think we need to put forth a little more effort to help you improve what you need. I will commit us to help you do that."

"The utilization of the Williams campus has been a concern before I started and certainly when I started and asked for a utilization report of all of our buildings," Bornstein said. "It remains a concern for me. What we recently decided to do was we moved another fulltime person over here to really focus on what are the needs, not only of Williams, but the corridor to Williams and the Grand Canyon area. After eight months what she has recommended is that we really focus on is more contract training, more outreach to the business community, outreach to the associations, finding out what the training needs are and how we address the training needs."