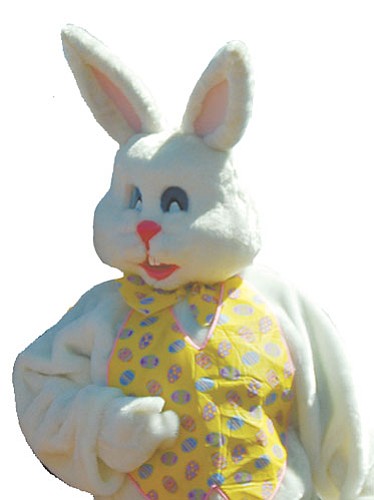 A number of big changes are in store for this year's Community Easter Egg Hunt, typically held each year at Cureton Park along Grand Canyon Boulevard. According to organizers Guy and Angie Mikkelsen, this year's hunt will be held closer to the downtown area at the Williams Recreation Center. The hunt itself will be held April 11, the day before Easter Sunday, from 11 a.m. to 2 p.m.

"The food bank is now taking over the community egg hunt. Rose (Newbold) at the rec center has agreed to partner with us and, rather than Cureton Park, we're going to have it at the recreation center," Guy Mikkelsen said, adding that a free swim is also planned at the Williams Aquatic Center April 11 from 1-4 p.m.

Volunteers for the event, he said, are sorely needed.

"We need a lot of volunteers to make this happen and, so far, we don't have any firm commitments on volunteers. We're definitely looking for volunteers and donors to help us get all the supplies and things we need," Mikkelsen said.

The hunt itself, Mikkelsen said, will be BYOB.

"Bring your own basket for the kids, but we will have a really nice food spread for the picnic aspect of the event and we'll be able to use the indoor facilities for that, which we're happy about. They have great staff that's going to be helping us," Mikkelsen said of the rec center.

Activities are planned for multiple age groups, according to Mikkelsen.

"We are planning some other activities, like for older children, we want to utilize their basketball courts and also have a bunch of Frisbees. We're going to do a basketball shoot and Frisbee throw for older kids, rather than having them hunt for eggs. They can still win prizes and get candy, but they'd be doing something that's more age appropriate to them," Mikkelsen said.

Mikkelsen added that eggs might be hidden in the skate park area of the rec center.

"We thought maybe we'd put the oldest group of kids in there and then outside kind of along the wall," she said. "Tentatively the egg hunt part is going to go up to age eight. Nine and above will have the other activities, the basketball and the Frisbee throwing and we're kind of looking into some other activities. If people would like to purchase Easter baskets, I'd like to recommend for them to go over to the dollar store and do that. They were really good to us at Christmas and Thanksgiving. They've got Easter baskets all over the place."

Bring out the family to hunt for eggs and more on Saturday
Williams Easter Egg hunt this Saturday
Community Easter egg hunt is April 3
Hop into spring with the Williams Food Bank
Easter Bunny will arrive at 11 a.m. Saturday
Event Calendar