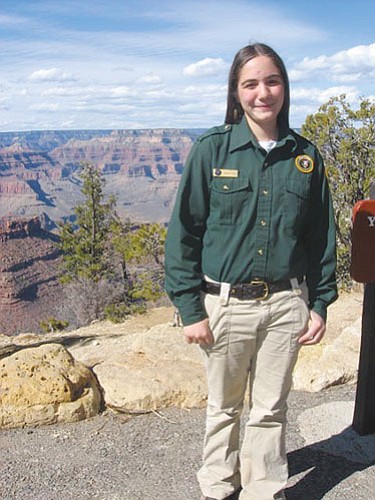 Sophomore Ashley Beale was recognized for the 600 hours she’s put in as a park volunteer.

A love for the outdoors has led sophomore Ashley Beale to an impressive record of more than 600 hours of volunteer service, earning her a President's Voluntary Service Award.

The national program to recognize young volunteers is sponsored by Prudential Financial and the National Association of Secondary School Principals.

Beale learned about volunteering in the park about two years ago while visiting a Junior Ranger table.

"I just asked the ranger if they had any volunteer opportunities," she said. "I met with Jacob Fillion (of Environmental Education) and got the paperwork filled out and just started."

As a park volunteer for the Environmental Education Division, she hikes the Rim and Inner Canyon trails, talking to and helping visitors.

She volunteered through the summer and is now out every other Friday. She also plans to be busy during Spring Break.

She was nominated for the recognition by Guidance Counselor Elizabeth Davis.

"She's always on the trail," Davis said. "She does a lot more than just putting in hours. She has a real interest in doing it, and it might help her with her career."

Beale said that she plans to become a park ranger - the question is whether it would be in the backcountry or on the river.

Originally from Washington state, she has been at Grand Canyon for four years. She is the daughter of Tim and Alicia Beale.