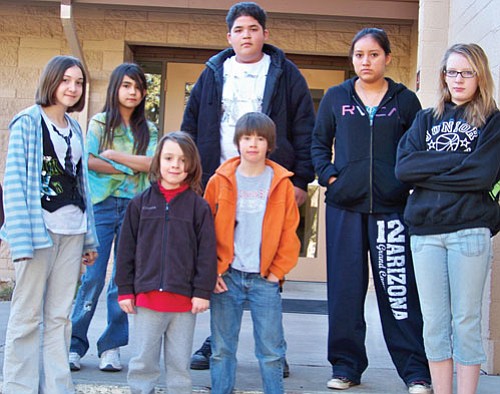 The airy, pastel abstract "Westward" earned freshman Stacey Youyetewa Best of Show in the sixth annual Art For Our Park juried student exhibit. Her award and others were announced at a reception opening the month-long exhibit on Tuesday, March 3, at Kolb Studio.

The exhibit features art from Grand Canyon School students as selected by a jury - this year comprised of Rene Westbrook, Caroline Williams and Deb Goepfrich. Along with the best of show, first-third place awards were given at different grade levels and local businesses also selected their favorites. First place winners received a deluxe art box.

This year's theme is "To go boldly."

The show is a collaborative effort that started in 2003 between Grand Canyon School, Grand Canyon Association and the National Park Service. According to Superintendent Sheila Breen, while there had been talk of student art shows before, that year the right people were in place to make it happen. She was able to commit the school's time and resources. Art teacher Amy McBroom was committed to shepherding students along, not only to create art but to see a work through to presentation. Grand Canyon Association's Pam Frazier cleared the way to use Kolb Studio and Jacob Fillion of the Park Service helped with interpreting the themes.

"It was just a little committee who sat down one day to start it. The people were all there," Breen said.

The result - that young artists get to show their work in a professional venue - is a rare opportunity for students here. Since 1994, Kolb Studio has hosted four or five exhibits a year, many coming through on nationwide tours and some that originated at Kolb out now touring the country.

"This is a world-class studio," said Breen. "People from all over the world want their artwork to be here and for GCA to knock out a month for our kids is absolutely amazing."

Park Deputy Superintendent Palma Wilson said that it wasn't just a celebration of art but also of community.

"We have our own school and our own bank and our own post office, which a lot of parks don't have, and we really do pull together as a community and work together and live together," she said. "And look at the art that come from our community. It's just so inspiring to see all the work that these kids have done."

Grand Canyon Association funds a limited-edition run of 50 posters, signed and numbered by the artist. The 2004 poster, "Havasu," by GCHS graduate Brian Skeet, is sold out.

Along with individual works, the show also features collaborative projects including game board designs made by the sixth grade who didn't start art until second semester.