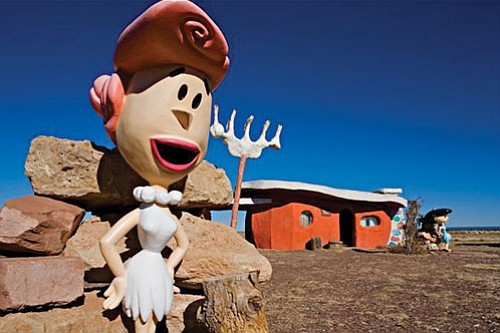 A view at Bedrock City on State Route 64 in Valle.

For many - locals and tourists alike - the memory of Valle's Bedrock City is of a desire unfulfilled.

"Lots of visitors say they drove by it when they were kids, unsuccessfully begging their parents to stop," said Linda Speckels, who founded the attraction with her late husband, Francis "Hudi" Speckels, in 1972.

Hudi's father had helped build a Bedrock City in Custer, S.D., in 1966, the year that The Flintstones ended their six-year, prime-time run on ABC. The animated series, which was produced by Hanna-Barbera, was a prehistoric send-up of The Honeymooners. By the early '70s, it was in wide syndication in lineups aimed at kids.

After a government contract freeze left him without work, Hudi began searching for land near a national or state park in Arizona on which to build his own Bedrock. At the junction of two routes to Grand Canyon, Valle was perfect.

It covers 18 acres with buildings made with gunite sprayed on metal frames - "like upside down swimming pools," said Linda. It also includes statues and a slide built into a dinosaur's tail. A theater shows cartoons and during the summer, there is a train ride.

It has no affiliation with the South Dakota park.

The Speckels came with their five daughters, who attended school in Williams. The youngest, Gina, helps her mother run the business.

Bedrock City has been a fixture en route to the Canyon, Linda said that the place does have its own following.

"Sometimes, the local people aren't so appreciative of it but artists and photographers, they love it," she said.

Local artist Rene Westbrook has visited a few times for the visuals - and the dinosaur slide.

"Artists love these places because they really are about taking a small visual idea and following through on a huge scale and then having the courage to charge admittance," she said. "Every artist I have ever talked with about this has a desire to make their own roadside attraction."

Recently, photographer Todd Oldham released a "magazine monograph" of photos he'd taken there about a decade prior when he came to shoot 4,000 dresses and accessories in and around the surreal landscape. The book, Bedrock City, is part of the PLACE SPACE series that "explores innovative, brilliant, singular places."

Along with thoughts by Oldham, it also features an essay by New York architect Michael Graves who found a joyful asthetic in the features there.

The site is also featured in the February 2009 Phoenix Magazine as one of 52 weekend adventures.

It's not only Americans who are drawn in. Speckels said that the Flintstones are well-known in Europe.

"The people in Europe, they know who the Flintstones are," she said. "They're especially popular in Germany. Not so much in Asia."

It's also drawn in a fair number of celebrities on their way to the Canyon to film or recreate, including Jane and Peter Fonda and Michael Landon. The most recent was Playboy "Girl Next Door" reality show star and former Hugh Hefner girlfriend Kendra Wilkinson, and her fiance Hank Baskett. They stopped with their entourage for breakfast and to look around after a visit to the Canyon in February.

Bedrock City is open every day. Admission is $5.

Bedrock City: a world of its own
Yabba Dabba Doo - Flintstones Bedrock City to be bird park
Letter to the editor: Bedrock City up for auction
Bedrock City near Grand Canyon for sale for $2 million
Yabba-Dabba-Done: Fred, Wilma and the gang bid farewell as Bedrock City closes after 47 years
Event Calendar