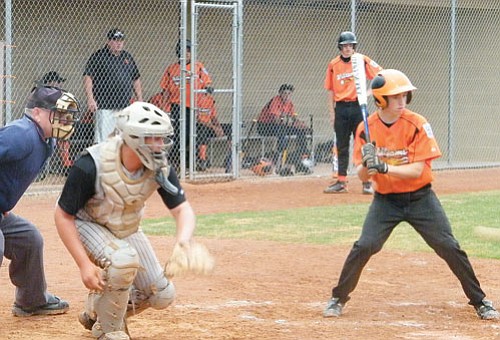 <br>Submitted by Jeanette Perkins<br> Williams Junior Coty Baxter at bat during a recent game in Prescott.

WILLIAMS - The Williams Little League Juniors team had a great 2009 season. The Boys finished with an overall record of 20-4-1. They finished fourth in the district during last week's All-Stars in Prescott, said Coach Herman Nixon.

In the first of the All-Stars game, the juniors found themselves facing off against Camp Verde. Williams took the win in the game with a final score of Williams 17, Camp Verde 12. Kohl Nixon pitched for the Juniors in the game, with relief pitching by Junior Jimmy Perkins.

The Juniors ended their run in the fourth game of the All-Stars when they took a loss to Chino Valley with a final score of Chino Valley 8, Williams 7.

Nixon called the team's season record an "impressive" one.

"Considering we played cities, which are all larger than us and have more kids to choose from," Nixon said. "We had a good run this season. We should have went further in the district All-Stars. We had Chino down to 7-2 going in to the bottom of the last inning, but due to Little League's pitch count rule, we had to pull Kohl Nixon, who held the hard hitting Chino team to two runs in six innings and our relief pitchers couldn't hold them down, letting Chino score six runs to win the game."

Nixon said he is already looking forward to next season and offered his appreciation to everyone who supported the team for their 2009 season.

"I would like to thank all the parents and members of the community who donated time and money to our team during our bake sale/car wash and assisted our team financially," Nixon said. "I would also like to give a huge thank you to Mike Cowen who bought our All-Star pants and socks for the tournament. I'm looking forward to next season. We only lose four players from this year's team and we have some good players moving up from majors to our level next year."