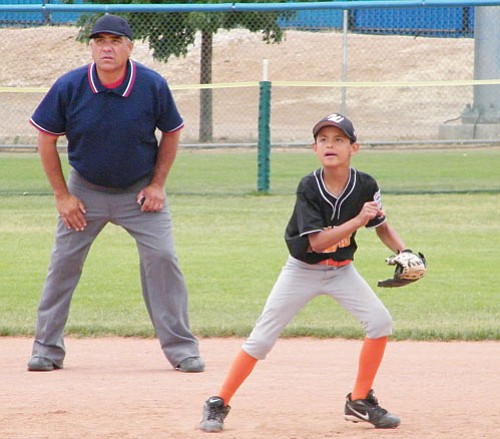 <br>Submitted by Jeanette Perkins<br> All-Star Daniel Lopez goes after the ball in a recent game as Umpire Fred Garcia watches in the background.

WILLIAMS - Little League teams are working hard this week as they take part in a number of important tournament games. The city itself, in particular the Little League Fields at Cureton Park, is being prepped for the upcoming District 10 Championship for 11-and 12-year-old ball players. According to Max Bishop, president of the Williams Little League Association, a number of teams have already played, while some teams will start their tournaments this week.

The nine to 10-year-old Little League boys played three games as of June 26, including an 8-5 victory over Sedona, a 14-3 loss against Prescott and a 17-5 win over Wickenburg. (See story below for Juniors score).

In order to prepare for the District 10 Championship, Bishop asked that people try to stay off the little league fields over the Fourth of July weekend in order to keep them in good shape for the upcoming tournament, which will be held in Williams. City crews will be working on improvements in the area, which will include new backstops, field work, painting bleachers and other projects.

"The city of Williams, we will be hosting the Little League District 10 11-and 12-year-olds Boys' Championship. Eleven teams will be participating, from Wickenburg to Flagstaff. The tournament will begin on July 6 and will last to July 15 and it is double elimination format, where if you lose two games, you're out of the tournament. The opening ceremonies will begin at 4 p.m. on Monday, July 6, and prior to the games it will feature introductions of all the participating teams and their players. Our Mayor John Moore will throw out the ceremonial first pitch."

He said the winner of the District 10 Championship will go on to compete at the state championship July 20 in Peoria.

Bishop said that hosting the tournament in Williams would be beneficial, both for players and merchants in the community.

"It's great," Bishop said. "I'm really excited. I think it's great for our local team. They don't have to do all the traveling, but I think it's also going to help the community. That's 120 kids, plus their parents and family and friends, so I expect it to benefit the local owners here of the restaurants, etc. We've been helped out by a lot of volunteers: Sue Atkinson, Bud Parenteau, the Williams Ambassadors, the Kiwanis Club, Gene Owens, Billy Martin and his staff of volunteer umpires."