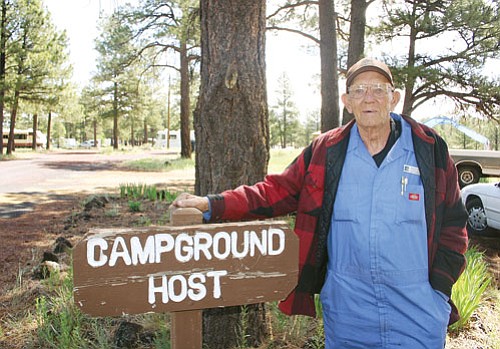 <br>Patrick Whitehurst/WGCN<br> Cataract Lake Campground Host Harold Hall has been a fixture at the Williams campground for 20 years. He said he has enjoyed his 20 years at the facility and was sad to see it close due to a tight county budget.

WILLIAMS - Beginning today, the west Cataract Lake Campground will close to overnight visitors in the Williams area. The camp on the east side of Cataract Lake, however, will remain operational. Officials with Coconino County decided to close the campground due to county-wide budget restrictions. The closure of the west-side camp means fewer spaces for visitors to the area. For Harold Hall, who has worked for Coconino County at the campground for 20 years, the closure marks the end of an era.

Hall's familiarity with the campground stretches back to 1981, when he used to camp at the site.

"I feel sad," he said. "I've worked and built it up for all these years and I got it to where it is pretty nice now. But the economy - what are you gonna do? You got to cut back in places where they don't want to, but they have to," Hall said.

One of his favorite aspects of the facility? He said it was the coolness of Williams as compared to other parts of the southwest.

"I live in Bullhead during the winter," Hall said. "And a lot of nice people come here. I've got to know them over the years. It's the same people every year and we've enjoyed it. The county has always treated me good. I can't say nothing about the county. They're sad about closing it, too."

The Cataract Lake Campground is typically full, or close to it, in the warmer months of the year. The cost to stay is roughly $8 a night. The campground costs about $5,000 a year to operate, according to estimates.

Hall said he usually keeps three camping spaces open for overnighters who may be looking for a place. The rest are filled with people that stay longer.

"I usually have about 23 spots full all the time," Hall said.

With today's closure of the campground, Hall said he plans to visit relatives now that he has no reason to stay in northern Arizona.

"I've got two sons in Idaho I haven't seen in a long time," Hall said. "So that's where we're going. We've been saying for years, 'We're coming, we're coming,' but getting off in October and you know Idaho in October, so we're going to leave and go to Idaho."

Members of Williams City Council talked about the campground at their regular meeting June ??. The matter will be discussed further at their next regularly scheduled meeting July ??.

"One of things I am sure we're going to have problems with is that the county is going to encourage people to carry out their trash and have signs posted to that effect, but the reality of it - we're going to have trash accumulated and who is going to maintain that and clean it?" said Council Member Bill Williams. "I've lived across the street from that campground for eight years and never had one single problem. I talked to some of the deputy sheriff's in town - they can't event remember when they have ever had a call there."

Council member James Wurgler said he was unsettled by the press release notifying residents of the closure, as there had been very little prior communication on the subject.

"For a period of time, about three or four years ago, there was almost like open warfare between our prior mayor and some people out there, who had abused the privilege of being out there. People basically went out there and spent the summer and they got to the point where they thought they were entitled to go out there and that the city had no right to have any say so about how that situation was managed," Wurgler said.

Council member Don Dent said the Cataract Lake campground is not the only campground that is being closed in Coconino County.

"It's all because of budget. The problem is, if you go over and tell them we want to operate that, we don't have the budget either," he said, adding that council members requested that the campground be turned into a day use park for local residents years ago.

"We don't have a park outside of Buckskinner," Dent said.