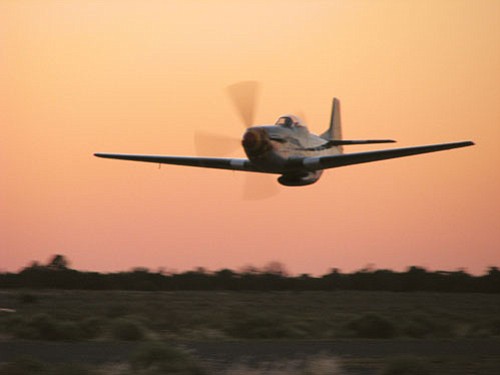 VALLE, Ariz. - The famed P-38 planes highlight this year's High Country Warbirds Fly-In in Valle, which will feature orientation flights in planes such as the P-51 Mustang, and a full day of planes zipping by overhead. Members of the P-38 National Association plan to conduct a general membership meeting during the 2009 event, where they will relate tales of the aerial aces of World War II. A number of pilots will be on hand for the meeting, and plan to answer questions about the planes, sign P-38 photos, and more. Two members of the 82nd fighter pilot group in Italy will be on hand for this year's event as well.

Bob Reed, museum curator, said many of the P-38 members flew in the second World War and that coming to Valle is a special treat for the group.

"It's a unique area for them to do the reunions. This will be done once a year," Reed said. "It's the nationals. There will be some P-38 pilots here and there may even be an ace with them. In order to qualify as ace you have to have five confirmed kills or five planes shot down. When you hear people talk about an ace that means they shot down five aircraft or more."

Aerial aces, he said, have become a thing of the past, thanks to modern warfare technology and computerized systems.

"There is no such thing as dogfights anymore," Reed said. "We're getting to a point where there are not too many of them left. For young people, if you have a question, now is the time to ask. We're all obligated, when you think about it, to do what we can to preserve our past for future generations."

The event will also host writer Steve Blake, author of a number of historical aeronautical books, including the book "Lightning Strikes." The P-38 symposium begins at 1 p.m. Saturday. Organizers will conduct the meeting in the new P-38 display, which they said is located inside the Planes of Fame Museum. At 12:30 p.m. the family of pilot Archie Jackson will help dedicate the display.

"The display itself is dedicated to a P-38 ace who was part of the nationals. He was awarded the Distinguished Flying Cross," Reed said. "They're all part of history. You read about them in the history books, which is kind of neat. We're trying to preserve that part of it - the human element. It's one of those things where you don't have to agree or disagree with any of it. It's just a part of history that you can never change."

The 2009 Fly-In is scheduled to open at 8 a.m. June 27. Admission is $8 for adults and $2 for children under 12-years-old. The Fly-In will be located at the Valle Airport and Planes of Fames Air Museum along Highway 64 between Williams and Grand Canyon. Parking for the event is free. Food and vendors will also be on hand during the event. Besides the Fly-In itself, organizers said orientation flights will also be held Friday and Sunday. For more information, contact organizers at (928) 635-1000 or visit the museum online at www.planesoffame.org.