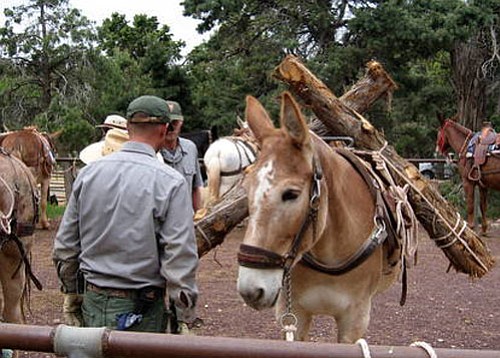 GRAND CANYON NATIONAL PARK, Ariz. - Last week, the Park Service started work on the South Kaibab Trail in one of the largest reconstruction projects on a Grand Canyon trail since the mid 1960s.

The project is one of many National Park Service projects being funded through the American Recovery and Reinvestment Act of 2009.

Grand Canyon National Park has more than 630 miles of trails, including 415 of inner canyon backcountry trails and 42 miles of inner canyon corridor trails. Over 200,000 visitors use these trails each year.

The reconstruction of the South Kaibab Trail will take between two and four years and will cost several million dollars to complete. Grand Canyon National Park received approximately $10.8 million in ARRA funds, of which $550,000 will go towards the reconstruction.

The South Kaibab Trail begins on the South Rim near Yaki Point and descends to the Colorado River. The distance from the trailhead to Phantom Ranch is about seven and a half miles, with an elevation change from rim to river of 4,860 feet.

The reconstruction project will significantly improve the condition of the trail for both hikers and stock users alike. The effort includes resurfacing, rebuilding steps, stabilization, extensive work on retaining walls and repairing water features.

The money will allow the National Park Service to extend 28 trail crew members that would have normally been furloughed; as well as purchase necessary equipment and supplies for trail reconstruction. A majority of the work that will be conducted on the trail is repair and replacement of stonework that is historically significant and requires master-level masonry skills and a background in historic preservation of masonry structures.

"Grand Canyon has total deferred maintenance of over $262 million, of which over $24 million is attributed to Grand Canyon trails," said Park Superintendent Steve Martin. "Funding provided through the American Recovery and Reinvestment Act of 2009 will help us reduce the park's deferred maintenance, and begin to rebuild park trails to a safer standard and create a lasting value for the American people."

The National Park Service decided to temporarily divert commercial and private stock traffic to the Bright Angel Trail during construction activities for the safety of stock users and hikers alike, as well as to save costs by reducing the time it will take to reconstruct the trail.

The South Kaibab Trail will remain open to hikers during trail reconstruction; however, occasional short delays may occur - hikers will be advised to follow instructions provided by trail crew members, or through signing and other advisories.

• Preservation treatment on 130 miles of roads.

• Repair and rehabilitation of housing at Supai Camp (an area established in the 1920s as a permanent location for the local members of the Havasupai Tribe to maintain a residential area in the vicinity of Grand Canyon Village) as well as the rehabilitation of two non-historic structures at the Camp.