On the seventh day He rested...just not right away 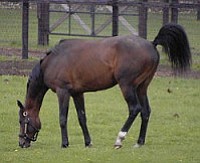 Well, I, as I'm sure you have, read the words in the bible wherein it states that God created the heavens and the earth in six days and on the seventh, He rested.

This seemed like a good plan to me. And, although I didn't actually create anything, I had had a busy week. So, when I got off work down at the Grand Canyon Depot I headed home, changed clothes and went on down to the stables to feed and groomed our horses, Rosy and Gunny.

That was about the time that I thought to myself..." Well, that's it for today, it's my Friday, and I'm going home and relax".

Then I heard the voice, loud and clear...no, not god, it was my wife Terri calling me on my Nextel radio telling me to get home and pick her up quick, as our friends mare just had a new foal.

I could hear the excitement in her voice and I could imagine her bouncing about the house like a little girl at the prospect of seeing that brand spanking new baby horse.

I too was excited at the prospect as I punched the gas, well tapped the gas and dawdled across town at a less then smoking 20 mph. Terri met me in the drive and we made a quick turn about and headed out the back way towards Cataract Road. As I approached the intersection with Cataract, there ahead of me at the stop sign was a pick up truck, but it was sitting willy nilly and facing me with the couple inside looking out towards the field behind the old Winchester Restaurant. Well, their gaze, of course, caused me to look in that direction and that's when I saw a horse, Alex, belonging to Chris of American Heritage Carriage, at a full gallop coming towards the street behind us. As I started making a u turn I saw Alex's' hooves hit the pavement, an as if he was on ice, his shoes went out from under him and he slid across the street on his side like he was sliding into home plate, then he jumped to his feet, unscathed, and off he went without missing a stride.

Now Alex is no wee little pony. He is a full grown Shire standing about 18 hands tall and is a veritable mountain of horse flesh, a Peterbuilt with hooves. Well, by this time my wife Terri was out of the Jeep and running while I circled around to head Alex off at the pass, so to speak. Then I saw that Ken from Cowboys Carriage Service had stopped, and seeing the fracas in progress, and not being one to miss a party, he joined in the chase too, and don't let ol' Ken fool you, he can run. Ken had him for a second,, until Alex spun around and kicked. Had Ken not been so fast nor had a life of cowboying behind him, he might have been wearing a pie plate size hoof for a retainer.

Well, the William's Police Department never likes to miss a good chase either, in fact I understand that they are quite good at just that, so Officer Dwayne Simpson joined in, wheeling that SUV about like it was a roping pony. As he did a bunch of caring neighbors and strangers all joined in to help. In the mean time Alex is having a grand old time leading us up the road then back down with all of us running, flailing and stumbling about the brush. Can horses laugh? Anyway, Alex is a not content to just run us all through the fields, no...he loves the woods and he must have wanted us to get some quality time in the pines because that's exactly where he headed next. He was running this way and that as Officer Simpson in his Patrol SUV headed in after him one way and I in my Jeep headed another while a third gent in his pick up went yet another direction. This well orchestrated assemblage of 4x4 vehicles should surely be able to head off one little horsy, or so you would think. We all had dismounted and were closing in on foot, running for all we were worth through the woods but Alex must have thought that we all still needed more exercise because he took off again this time running straight towards me. Now, imagine a horse the size of an armored personnel carrier coming straight at you, because that's what Alex looked like to me. I found myself standing there in the woods, arms waving, wondering what exactly was I going to do. Would I just grab onto him? I don't think so, that would be like grabbing a freight train, and shouting "Whoa" had not worked too well up to that point, and about then I was really hoping that he would turn another direction, which he did, thankfully.

We all headed back to our respective vehicles to continue this ridiculous round up of sorts and I realized that I could not see my Jeep, well actually it was my wife's Jeep, her green Jeep now lost somewhere in the green woods where I imagined I would find it years from now with a tree growing through it and a Ranger telling me that no, I could not cut down the tree unless I had a firewood permit. Well, I did find her Jeep and rejoined the chase , emerging from the woods to see Chris, Alex's owner in his carriage drawn by Wendy, a pretty Belgian, blazing towards this collection of Keystone Cowboys with a group of Japanese tourists hanging onto the carriage for dear life while taking pictures at the same time. Actually, I just made that part up, but it does make for a great visual, doesn't it?

Anyway, Chris arrived in an empty carriage, being drawn by Wendy who is Alex's horse honey. Chris, with a fatherly rise an eyebrow shouted a commanding "Whoa!" and with that Alex decided that we had all had enough of a workout for a Sunday night, and he came to a thunderous halt.

It turns out that Alex had just missed Wendy, and so he had nudged open the gate, the way a bulldozer nudges, and went looking for her. So you see, this is really about how love drives us to be together. Soon Alex and Wendy were back in their pasture together and all was well. Chris and his sweetheart Enedina finally bid their horse's goodnight and headed home together.

Eventually Terri and I did get up to our friends home to see the beautiful male foal, the newest four legged arrival to Williams. He is all legs and head and a real beauty and his owners Mike and Chris couldn't be happier with the little chap.

But this is not quite the end, not yet. It seems that the mare, being new to this mommy stuff, was a bit afraid and unsure of herself. And the foal, well, he's like one hour old, so he had little clue as to what to do. Enter the crew from William's Feed and Pet.

Bill, Bob, Tansy and Cee Cee, all arrived and after evaluating the situation Bill and Bob enter the stall and proceeded to calm the nervous mare and assist the foal in getting a good purchase on the source of his breakfast, lunch and dinner. They were masterful. Gently they nudging the foal about and under momma while reassuring her while speaking in whispers to the pair. It was truly a wonderful sight to have witnessed. Soon junior was nursing away and the boys were dusting themselves off and heading out, like a pair of Lone Rangers, with their wives at their sides, into the now setting sun.

Mike and Chris stood fast together, all smiles, watching their pair, mare and foal, bonding as only mother and offspring can do.

Terri and I too headed home for some dinner, a drink and some quiet time together. After all, I told you this was a love story.