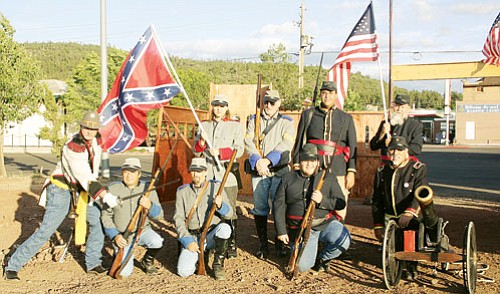 WILLIAMS - As city officials talk about a possible noise ordinance in the downtown area, gunshots ring out on a nightly basis. Gunfighters with the local Cataract Creek Gang perform nightly shootouts in the downtown area during the summer months. More recently, members of the Historical Reenactment group have also been shooting off mock weapons, including a cannon, in the downtown area. Unlike the gunfighters, however, members of the reenactment group have come under fire from local officials, who said the gunshots, and the firing of the cannon in particular, have been the object of numerous complaints from both business owners and visitors to the area. City officials told members of the Historical Reenactment group to stop firing their weapons June 11 until a solution could be worked out.

According to Jean-Ellen Kegler, manager of the Williams Main Street organization, the reenactment group differs from the Cataract Creek Gang, as the reenactment group has no official supervision, Kegler said. She added that the nightly gunfight also reflects the western heritage of Williams.

"The Wild West Adventures is actually the organization through which (the) Cataract Creek Gang does its gunfight and that is funded by the city and it's supervised by Main Street," she said. "It's tightly organized. The street is blocked off. People know what to expect. Guns are fired at a very specific time, for very specific reasons, and people are warned about it. They know that that is going to be a part of the show."

While some outdoor downtown activities have enhanced the town, she said others, such as the firing of the cannon, have served to scare Route 66 visitors. But while some have complained, visitors to Williams often flock to the group's reenactment area, called "Fort Williams," to have their picture taken with the group. The fort was recently located near the Williams-Forest Service Visitor Center and the Williams Recreation Center.

"Main Street is in favor of even more street entertainment. That whole street scene is great for our town. People love it and we have such great historic characters that we could be taking advantage of," Kegler said. "What's happened in this particular situation is that, probably because we don't have a system yet to evaluate potential performers, we have some activities going on that really are not enhancing the street experience. We have people being afraid because guns are being shot, a cannon is being fired, and they don't know what to make of it. As we develop the street scene, we need to get a clearer picture of what we want and how we want people to adhere to some regulations that are good for everybody. I'm a great fan of David Bixby and Historical Reenactment. I think it has a really significant place in our town. We just want to be sure it's done right and that it's best for our town and visitors alike. Main Street, for instance, has a promotions committee that could help begin this process of putting some regulations together, but in the long run we'll have something good. In the short run we have a little bit of a problem, just because of enthusiasm. We don't want to kill off that enthusiasm, we want to support it. We just want to direct it in the best possible way. Since we represent merchants and that whole area of town, we can advocate on behalf of good ideas. Our job is developing commercial activity."

David Bixby, with the Historical Reenactment group, said the group's intention is to promote Williams.

"Our job is to attract tourism and help the businesses," Bixby said. "We bring history to the streets. It's a club. We have probably 30 people who have marched with us in the last eight months. On Memorial Day we recruited three tourists that were not U.S. citizens. They all saw Civil War films and they suited up and marched in the parade. We recruited people right off the street and they were able to be in the event instead of just watching it. We just started recently doing the guns on a consistent basis, honoring the veterans, every night when the sun goes down. Every single night we honor veterans and do a little dialogue about the veterans."

The cannon itself, a PVC replica, is merely a shotgun filled with flour. The shotgun is located within the barrel of the cannon. When compared to a real cannon, Bixby said the loudness of his mock cannon is like a gunshot.

"We don't have anything that really puts out that kind of sound," Bixby said. "It spits out a powder and makes a lot of smoke. We get clearance from the sheriff's department every time we do it."

When it comes to firing the cannon and guns, Bixby said he is willing to work with city officials.

"What I am interested in is serving the community," Bixby said, adding that he is approached by visitors to the area every night that ask him questions about the community. For that, he said, he hands out literature provided by the Williams-Grand Canyon Chamber of Commerce. Extra uniforms and hats are also on hand for Civil War fans to participate in the reenactments. The group itself can be found in the old court building at 117 W. Route 66, Suite 160. Historical Reenactment can be reached at (928) 635-2376.

Bixby said the group would often perform near the areas where the Cataract Creek Gang offered their nightly gunfights in the hopes of drawing a bigger crowd to the event.

"There's always a window where there's going to be gunfire," Bixby said. "When we shoot the guns we honor veterans. It's nothing like the Cataract Creek Gang. We strictly honor veterans."