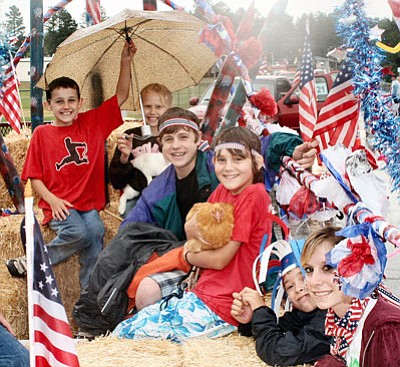 WILLIAMS - While the Fourth of July is still several weeks away, organizers of the event have been making plans for months. This year's Fourth of July celebration will focus on the theme of the day - "Celebrating Small Town Traditions" - by offering a multitude of activities geared toward small towns and family fun.

"We want to spend the day playing traditional and timeless games in a small town atmosphere. That's what living in a small town is all about," said Sue Atkinson, events coordinator for the Williams-Grand Canyon Chamber of Commerce.

The celebration actually begins July 3 when the Northern Arizona Antique Tractor and Engine Association rolls into town for a tractor show. The tractors will remain on display in downtown Williams through July 5.

On July 4, start the day off right by eating pancakes 7-10 a.m. at the Maine Consolidated School's Annual Pancake Breakfast. At 10:30 a.m. the town entry arch will be dedicated on North Grand Canyon Boulevard. Once in place, the arch will welcome visitors to the Gateway to the Grand Canyon®.

Celebrate 100 years of Fourth of July parades in Williams by becoming a part of the historic photo re-enactment of the 1909 Fourth of July parade. Participants should be dressed in period costumes of the early 1900s. The photo will be shot at noon at the Grand Canyon Hotel on the corner of Route 66 and Second Street.

Participants should plan on arriving slightly early so that organizers can position people for the shot. Yvette Hudson is organizing the photo shoot and can be reached at (928) 635-4467.

The Williams Community Social will be held at the Williams Recreation Center, 301 W. Railroad Ave. and will feature the Williams Rotary Club's Barbecue. The social is offered 1-5 p.m. The Williams Kiwanis Club is hosting a corn roast and the Williams Lions Club is having a watermelon-eating booth along with a seed-spitting contest. Children's games and family activities will be offered throughout the afternoon.

Atkinson encourages all service clubs and organizations to participate in the community social.

"The social could really turn into a moneymaker for local groups," Atkinson said.

At 2 p.m. a Community Showdown will be staged at the rec center with games such as tug of war, balloon tosses and pie eating contests. Atkinson encourages groups to compete against one another during the showdown.

"I would like to see the police department versus the fire department, the newspaper versus the chamber ... those types of groups," she said.

Also that afternoon a free swim will be held 1-4 p.m. at the Williams Aquatic Center, 315 W. Railroad Ave. The Railhead Shooting Competition will be held all day at Kaibab National Forest's shooting range. The Community United Methodist Church, corner of Second and Sherman, is hosting the popular ice cream social 4-4:30 p.m.

The day will end with a parade at 6 p.m. along Route 66. Once again, a parachuting team, the Arizona Skyhawks, will dive in formation into the heart of the parade in downtown Williams. This year's grand marshal is Donna Eastman-Liddle, former chamber CEO/president.

Parade applications will be accepted through June 23. Groups that sign up after that date are not guaranteed specific placement in the parade line up. There is a $20 entry fee.

"Most communities charge a parade entry fee and $20 is a relatively small amount. Flagstaff charges $50 and Prescott charges $350," said Atkinson. "Entry fees collected offset the cost of parade awards, sky jumpers, etc. It is not cheap to have a parade and this is our biggest parade of the year."

williamschamber.com for entry forms. Entry forms can also be picked up at the Williams-Forest Service Visitor Center, 200 W. Railroad Ave.