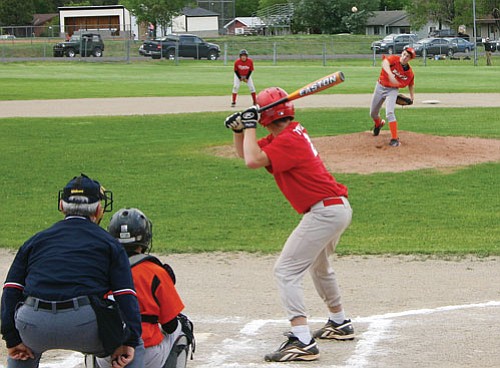 Patrick Whitehurst/WGCN The Williams Juniors practice for an upcoming game. The Juniors face an undefeated team in the Continental League on Friday.

WILLIAMS - The Williams Juniors put another rung on their belt after defeating the Continental Rays in Flagstaff May 29. Baseball officials called the game after five innings of play. The Juniors took the win in the game with a final score of Williams 16, Rays 1.

"Our boys came out and hit the ball well and, once on base, never let up stealing bases at will," said Juniors Coach Herman Nixon. "Once we were up over 10 runs we had to back off a little and quit stealing, but the boys continued to hit and score runs."

Pitcher Kohl Nixon brought his record for the season to 6 and 0. Nixon and Juniors players Adrian Solano, Coty Baxter and Joaquin Salaz were all three for three at the plate in the May 29 Rays game.

The Williams Juniors picked up their second loss of the season, losing to Mt. Elden 8 to 6 June 1 in Williams.

"We came out flat and didn't play up to our potential this game, we gave up six unearned runs by a combination of errors and walks," Nixon said.

However, there were some positives to the game. Kohl Nixon went 3 for 3 at the plate and Williams Pitchers Jake Harner, Joaquin Salaz and Jimmy Perkins all came in as relief pitchers holding Mt. Elden to two runs in four innings.

"We need to pick it up for our next game this Friday in Flagstaff as we play the No. one team in the Continental League who haven't lost a game this season," Nixon said. The Juniors will also play a double header Saturday at Continental fields at noon and 2:30 p.m.