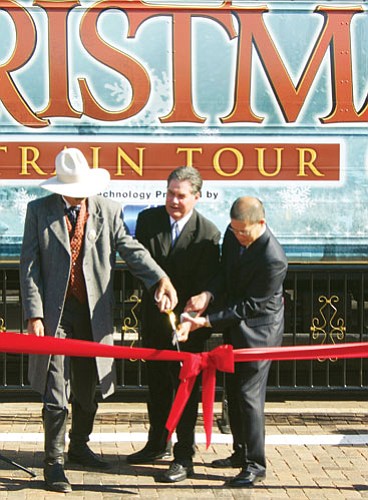 Pictured (from left to right) is Williams Mayor John Moore, Bob Gault, vice president of Walt Disney Motion Pictures Studios special events, and David Lim, chief marketing officer for Amtrak, as they cut the ribbon at the opening of the May Christmas event.

WILLIAMS - Despite a few technical issues, the train tour for 'Disney's Christmas Carol' film offered a fun glimpse into author Charles Dickens' "Christmas Carol" experience this past weekend. The tour made a stop in Williams at the Grand Canyon Railway May 29-31. Disney's version of the classic Christmas tale, starring Jim Carrey, will hit theaters in November. Besides Williams, the tour's only Arizona stop, Disney will visit over 40 other cities across the U.S. The tour departed this week for its next stop in Santa Fe, N.M.

Thunderstorms caused a few glitches upon the tour's arrival in northern Arizona and forced organizers to screen a trailer for the new film in the Grand Canyon Railway's hotel area, rather than inside an inflatable 3D theater, which had to be dismantled prior to the event due to rain and hail issues. Despite the weather, large crowds came out for the weekend event, including Williams Mayor John Moore.

The mayor, assisted by Bob Gault, vice president of Walt Disney Motion Pictures Studios special events, and David Lim, chief marketing officer for Amtrak, cut a red ribbon at the opening of the May Christmas event. Students from Heritage Elementary School were also on hand to sing Christmas Carols to the gathered crowd.

"We actually looked at over 250 cities as far as what we possibly could or could not use as a staging point for the tour itself," Gault said. "The reason why Williams and why we picked other markets are obvious. This is a great spot, Gateway to the Grand Canyon, beautiful station. We don't necessarily want to go to all primary markets. We think secondary markets are really our mission in some respects. We worked with Amtrak very closely on this, what would work and wouldn't work, as far as going 16,000 miles across the country and over 40 cities. Williams is a great place. It's absolutely fabulous and it has a big draw from Phoenix, Flagstaff, so we feel that the draw is there. We can draw from over a 100-mile radius. Williams is beautiful."

According to Lim, the project has been on the drawing board for over a year.

"Bob and his team came down to our office to tell us about the concept well over a year ago. We obviously share the benefits for both us and Disney. It's just been a great partnership. For us it's been about getting greater awareness of rail travel, certainly of Amtrak the brand, and really reaching new audiences, such as the younger traveler," Lim said.