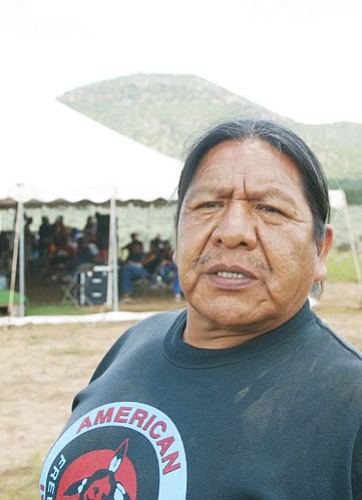 RED BUTTE, Ariz. - A number of organizations, as well as members of the Havasupai Tribe and other individuals, voiced their opposition to uranium mining recently during a gathering at Red Butte, located between Tusayan and Valle. The gathering was held July 24-26 near the sacred Havasupai location. Officials from the Sierra Club, the Grand Canyon Trust, the Center for Biological Diversity and the Havasupai Tribe organized the gathering along with Kaibab National Forest officials and other groups. The gathering was considered an important meeting for Native Americans, as a number of tribes from across northern Arizona joined forces to oppose uranium mining in the Grand Canyon area. The event marked the first time in years that some members of the Supai Tribe came from the bottom of the Canyon, according to Andy Bessler with the Sierra Club.

"The last gathering they had was over 10 years ago," Bessler said, adding that the event was powered solely through the use of solar energy. The gathering was broadcast to computer users nationwide on the Internet via a solar-powered bus located on the site.

"There's thousands of potential drilling sites, these companies like Vane Minerals wants to open," Bessler said. "We're trying to prevent that, because the Havasupai feel that that uranium mine is a direct threat to their sacred site and also to downstream users. This potentially could contaminate ground water and surface water."

Tusayan District Ranger Angela Parker, as well as a number of other Forest Service officials, were on hand for the recent Red Butte event.

"I'm very glad to have the Havasupai gathering here at the Tusayan Ranger District in front of the sacred area of Red Butte. We welcome these folks here to enjoy their sweat lodge and their everlasting fire and to say their traditional prayers and dances in sharing their information on uranium mining," Parker said.

Parker said Forest Service officials are currently in the early stages of a proposed action for an environmental impact statement (EIS) for Vane Minerals, Parker said.

"There will be scoping meetings that will be held in the second week of August," Parker said. "We will also be traveling to the Supai on Aug. 17 for a public meeting. We welcome any comments regarding uranium and the Vane EIS."

Roland Nanakaja, the natural and cultural resource director for the Havasupai Tribe, said he was happy to have worked with the Forest Service in organizing the gathering as part of the Grand Canyon Enlargement Act. Nanakaja, who has worked as the director for over 15 years, called the gathering a very spiritual event for him.

"We are opposing the uranium development and we'd like the U.S. government to look more at wind and solar energy, which is much cleaner," Nanakaja said. "Extracting these minerals from the earth will only cause imbalance to the elements and the absolutes. I feel that our gathering here, to educate ourselves as well as the people that live in northern Arizona. We feel that the youth need to see that we are serious about protecting our sacred lands."

He said the number of tribes that attended the gathering showed the solidarity among the different Native American cultures when it comes to uranium mining.

"We're united the different races here to show that it is not the Supai people alone in this struggle anymore," Nanakaja said. "The mining industry will contaminate the springs in the corridors, the Canyon, which would defeat the riparian laws, the endangered species, the American Indian Religious Freedom Act, the Restoration of Religious Freedom for Indigenous People. We are here in unity to convey to the people of northern Arizona that the Grand Canyon needs to be protected. We need to have federal entities live up to the charge that they have to preserve and protect these resources for future generations."

Flagstaff Mayor Sara Presler was in attendance for the gathering July 25 and cited what she called a "distinct difference between what is legal and what is ethical."

Presler also serves as a liaison for President Barrack Obama's Mayor's Advisory Team and recently met with officials in Washington, D.C. on the topic of uranium mining.

"This past week, the Obama Administration decided to invoke an administrative rule putting a halt to any new uranium mining claims in the Canyon in the next two years as environmental and economic studies are conducted," Presler said. "I meet regularly with Steve Martin, the superintendent of the Grand Canyon, Rex Tilousi, who is the former chairman of the Havasupai tribe and other tribal leaders who are passionate and care about this issue."

Taylor McKinnon, public lands campaign director for the Center for Biological Diversity, called the gathering a "testament to the broad and deep cultural movement that we have now of uranium resistance."

"We have people here from all over the southwest, representing many different tribes, people from all different cultural persuasions and people, in fact, from all over the world here united against uranium mining and the effects that it will have on people and all the other species that depend on this region for their lives," McKinnon said.

According to McKinnon, the Center for Biological Diversity has tracked and opposed new uranium mines around Grand Canyon for years. The center also provided financial support for the recent Red Butte gathering.

"We successfully blocked one effort and have sued over the Department of the Interior's previous failure to enact Congress's June 25 emergency withdrawal that would have prevented new (Grand Canyon) uranium claims and exploration," McKinnon said.