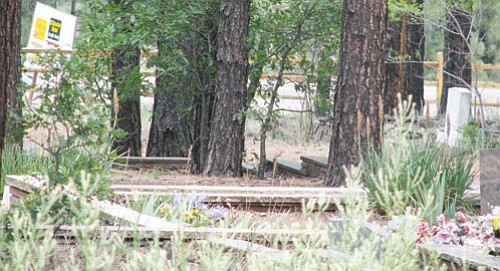 <br>John Christian Hopkins/WGCN<br> Vegetation is visible on and around graves at the Williams Cemetery.

WILLIAMS - The city is not responsible for maintaining the Williams cemetery, according to Phil Langston who manages the cemetery.

"The city is not responsible," Langston said. "It is family maintained."

Lifetime Williams resident Anita Stilwell agreed that the lots are supposed to be family-maintained, but pointed out that the city has the authority to go onto private property if conditions become hazardous or detrimental.

"It's so disheartening to find a grave beneath eight inches of pine needles because no one has maintained it," Stilwell said.

The condition of some of the cemetery plots has become a topic of community concern lately, as some of the plots appear neglected.

"All we do is sell them the plots and send the information to the (county) recorder's office," Langston explained.

The families also receive a booklet of the rules and regulations that states that care of the plot is the family's responsibility, he added.

"They only pay for the plot, not perpetual care," Langston said. "It shouldn't be a surprise (that the city isn't responsible for maintaining the individual plots)."

People own the plots after purchase, he added.

Stilwell's mother, Linda Pettit, once won an award from the American Legion for her voluntary efforts to keep the cemetery maintained. Pettit maintained graves for four decades.

That's how Stilwell and current family members got involved.

"It was mom's passion, and now it's ours," she said. "She did the hard work and we thought it was imperative that we keep it up."

As a courtesy, the city built and maintains the roads at the cemetery, and will plow in the winter, Langston said.

"Occasionally we'll go up there and bring up a load of dirt to spread over the graves if it's too thin," Langston said. "But it's as a courtesy."

When a plot is bought, the city quit claims the piece of land to the purchaser.

It doesn't seem too hard to imagine that cleaning up the cemetery could become part of someone's community service or the summer youth employment program, Stilwell said.