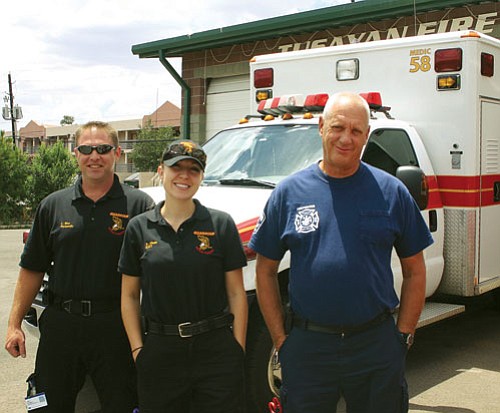 TUSAYAN - Officials with both Southwest Forestry and the Tusayan Fire Department are beginning preliminary work on a project that could help alleviate the possibility of a forest fire in the area. While much of the Tusayan area has already been cleared of possible fire fuels as part of the Wildfire Protection Program, operated in conjunction with the Forest Service, there are still a few areas that need work, said Robbie Evans, fire chief for the Tusayan Fire Department, located just south of the IMAX Theater.

Evans said he worked on the grant, totaling over $70,000, with a number of individuals, including Bob Blasi with the Forest Service.

"It's off the federal government, but it's a cooperative forestry program for hazardous fuel on non federal lands," Evans said. "There's a piece of property over here, the Cotzin property - the one they were thinking about putting housing on when they tried to incorporate here last year. The owners of it, Medallion Ventures, they got together with Southwest Forestry. Bob Blasi from the Forest Service put them in touch with me and we kind of worked on the grant together. It's to reduce fuels. They're going to go out and do some thinning, get rid of some of the sage brush in some of the low lying areas to try to get rid of all the dead and down woody debris that's in there. We have the Tusayan Wildfire protection program, which we've been working with the Forest Service on for like the last four or five years. We've pretty much got most of Tusayan done except for that little piece of private parcel, which is 160 acres."

Southwest Forestry officials met with Evans this week to walk the property and come up with a plan of action to remove the debris. Evans said the woody debris would be piled into certain areas on the property. Tusayan fire officials will then burn the piles.

"We're going to go in and broadcast burn pretty much the entire property," Evans said.

He said work on the project could begin as early as the end of the month.

"We're real big on training. That's kind of what we do," Evans said. "Once we end up training them, they end up going to work for a real fire department someplace else. We did an EMT class, through Coconino Community College, January through May. We got some EMTs out of that, a bunch of park service people got their EMTs out of it."

The department began in the late 90s, Evans said. He took over as chief in 1999. Laura Pitsinger is second in command of the Tusayan Fire Department. Both are paramedics.

"We used to be across the street in the old Papillon hanger," Evans said, adding that the new building was constructed roughly five years ago.

The Tusayan Fire Department typically answers around 300 calls a year. A majority of their calls consist of medical responses to individuals with health problems that are visiting the Canyon.

"A lot of things up here are shortness of breath, heart problems," Evans said.

Besides medical calls, the department also responds to a number of wildland fire calls in conjunction with the Forest Service. They've most recently assisted with both the Ruby and Indian fires in the area.

More on the Tusayan Fire Department can be found online at www.tusayanfire.org.