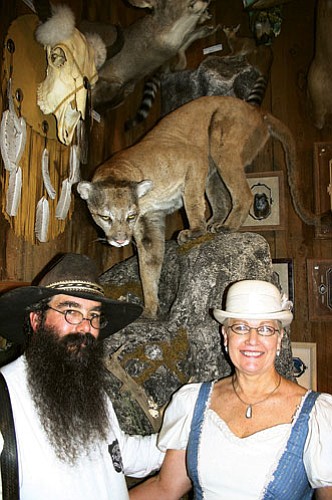 VALLE, Ariz. - When Marshall and Bj Rader saw the large animal dash in front of their Ford F150 one November evening in 2007, they had no idea how big that animal would turn out to be, nor that it would go on to reach urban legend status across the nation. The Raders were on their way home at roughly 11 p.m. when the mountain lion dashed in front of them on Highway 64 near the Red Lake area just north of Williams. The large creature weighed a record 240 pounds.

Marshall Rader said he saw only the top of the animal's head and tail when he hit him.

"His tail was way out in the other lane. When we did hit him it was a little bit of a shock. I was doing 65 miles per hour," Rader said.

The lion is currently mounted on a high pedestal rock on display at the Double Eagle Trading Post in Valle, but due the nature of his death, Rader said the hide was slightly altered.

"But when you look at his feet you can tell he was a monster," he said. "He does look a little smaller mounted than he did in real life."

Shortly after the incident, pictures of the mountain lion began to circulate on the Internet. The photos were taken by the wife of Arizona Department of Public Safety Jason Ellico, who assisted the Raders following the accident. Ellico intended to e-mail the photos to a friend, though those same photos eventually circulated through the Internet. Ellico assisted in the skinning of the animal in order to keep the lion's large skull for Boyscout Troop 138 in the Williams area.

"Within about 72 hours of that, that e-mail had been picked up and sent everywhere. I've had people come in from Mexico, that said they saw it in Mexico, we've had people that have come from as far as Washington state that saw it on the Internet," Rader said. "Our oldest daughter at the time lived in Paducah, Ky. She called Barbara (Bj) and said, 'Mom, your mountain lion is on TV.' Somebody in Paducah, Ky., claimed it (and) put those pictures on the news. It was on the six o'clock news in Paducah, Ky., as being the largest mountain lion ever killed in Kentucky. It happened in other states. Obviously what somebody did is they cropped out the picture of Jason and put their own or somebody else's picture in. So there's a whole bunch of different faces attached to the same critter. We've had people come in at least eight or 10 times that had seen it and actually called."

Stories started to develop, including tales that the mountain lion was gunned down with a machine gun after it attacked a state trooper, Rader said.

"It was just the funniest thing," Rader said. "People see mountain lions in our area quite frequently. It's not unusual. We've seen two on the road, plus we hit the one. I think there's a better opportunity for food up here. They chase the rabbits and the jackrabbits and, we don't see them a lot, but we've got javelina up here. There's lot of food for them."

Besides the mountain lion, a number of other animals are on display at the Double Eagle Trading Post, most of which can be found within the Grand Canyon National Park.

"I try to keep all the animals in the shop that you could see in the park," Rader said. "The only thing I don't have in here is (a) bighorn sheep, simply because they are so much rarer and very, very expensive. I have everything else, the elk, the mule deer, the white tail deer, the coos deer, the bobcats, the badgers, the mountain lions, and wolverines from up north, skunks, fox, coyote and then a timber wolf as well. A lot of people go to the park and don't see any animals at all. They come here and they at least get a chance to take some pictures and see what lives in the park."

Taxidermist Wes McGlothlin of Virginia prepared the mountain lion, as well as other animals in the store.

"He did my grizzly. We sent the lion east and he kept him for almost nine months before he was finished," Rader said. "He had the skin tanned and everything. Officially the mountain lion weighed 240 pounds. He was eight feet and one inch from nose to tail, which according to the park service and the game department here, if we had killed him with a license and a tag and a rifle, if he would have been shot or hunted, he would have been number one or two. It was the biggest mountain lion in northern Arizona that they had ever seen, which means there's more out there."

The Rader family has owned the trading company for seven years, but the store itself has been open for much longer.

"The Double Eagle Trading Company has actually been here for 35 years now. We're the third owners. We found it on vacation," Rader said. "We were actually up here traveling for a family reunion. We brought our motorcycle, so we rode up to the Canyon. Just like any other tourist. We rode by one day and saw the stuff. So we stopped and I bought a big set of horns. It was a seven by seven rack for an elk. Barbara didn't want to carry them on the motorcycle. So we decided the next day to come back and my sister was going to meet us here and would get the horns. The next day when we came back, I found a for sale sign that had blown down out front. I read a little bit about it and came in talked to the owners and, pretty much, within 24 hours of that we owned it."

Later they learned that a house, located directly behind the store, came with the property.

Double Eagle Trading Post is open seven days a week, except for a week between Christmas and New Years. The store is open half a day on Thanksgiving. The trading post is located at 526 S. Highway 180 and can be reached by calling (877) 635-5393 or on the Web at www.doubleeagletrading.com.