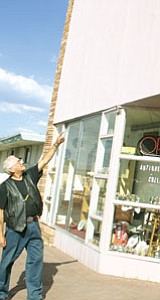 <br>Patrick Whitehurst/WGCN<br> Al Dunaway, with the Grand Canyon American Legion Post 42, points out the area where artists will paint a mural for veterans.

WILLIAMS - City officials authorized a proposed mural for the Grand Canyon American Legion Post 42 during the regular meeting of Williams City Council July 9. The decision came after the matter was tabled for further review on May 14, following heated debate between Legion members and members of the Williams Main Street Committee on whether the mural conformed to city guidelines for the downtown area.

Local artists Mike and Sandy Rusinko will paint the mural, according to Legion officials. An example of their work can be found on the outside wall of the Brown Bag Sandwich Shoppe on First Street. The Legion mural, to be located on the wall above the shop windows at 117 E. Route 66, will measure 10 feet tall by 48 feet in length.

Williams Mayor John Moore said that city officials received a letter from the Main Street organization July 8, which detailed their issues with the way the current ordinance reads when it comes to murals within the city. Nine points in particular, Moore said, were unclear to Main Street officials. Some of those points included questions on whether the item in question would be an asset to the central business district, whether it compliments the overall design of the building where the mural would be located, whether it matched the era of the original construction or anticipated renovation, whether it matched the flavor of the district in which the mural is to be located, reflected the historic and cultural traditions of Williams and Arizona, and whether it would be large enough to be significant, but not overwhelming, as well as other points.

Al Dunaway with the American Legion Grand Canyon Post said the current design for the mural counts as the third version of the project.

"The purpose of it is to honor veterans, all veterans everywhere," Dunaway told council members during the July 9 meeting. "It's got the emblems of the five services on it. It's based on the American Flag, the flag raising at Iwo Jima, which one of our Arizona Marines helped raise the flag and a gentleman from Williams was on top of the mountain watching him raise it, the Arizona Memorial, of course we all know the cemetery area is Arlington, which the most well known veteran cemetery in the world, and the old veteran on the bench there is talking to his grandson, a young boy, telling him about freedom not being free and the price that's been paid for it."

Dunaway added that he does not believe the mural will bother anyone who sees it in the downtown area.

"I believe it's going to attract a lot of attention to our business district. This is something people are going to stop and want to take pictures of and get out and walk around, this is going to enhance all the businesses in the area, because once people are out and on foot they will go in," Dunaway said, adding that the legion has the financial backing to maintain the mural as well.

Main Street board member Kim Kadletz said that Main Street members loved the design of the mural, but questioned the guidelines in the ordinance.

"We recognize that, while guidelines are just suggestions that are open to interpretation, we have no authority to alter or ignore the existing ordinance," Kadletz said, adding that it was difficult to make a decision on the matter due to the subjectiveness of the guidelines. He suggested that officials consider changing the mural guidelines in order to make it easier for volunteers in other organizations to make decisions.

"This mural can affect what happens in the town after tonight. If it's approved by these guidelines, every proposed mural will be in front of you, because none of us are wise enough to determine what all these subjective terms mean," Kadletz said. "At the very least, if it's approved, I would suggest as a citizen, as a member of Main Street and the Design Committee, that you rework this immediately. Myself personally, although I like the mural, I think the artwork is fantastic, I don't think it's appropriate. The mural is going to be 48 feet wide, 10 feet high. There is nothing else like it in town."

Williams City Councilmember Don Dent said he appreciated the effort of the Main Street Committee when it came to the mural and said the guidelines were open to interpretation.

"All the guidelines here are subject to different people's interpretations," Dent said. "To me, it's going to be a great asset to the business district. I would venture to say, and this is just my opinion that there will be more people stopping to take a picture of that mural than the historic clock that we spent $50,000 to $60,000 putting up on the corner. I think this will be an attraction and I do think it will get people stopping and get them out of their cars and they will tell other people to come and look at the mural. That's my personal feeling."