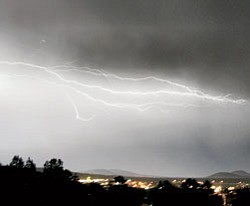 Monsoons are a beautiful thing. They can provide much needed water for northern Arizona in the summer months and are capable of providing thrilling light shows when the storms roll in at night. At times, summer monsoons can also be quite dangerous. Monsoonal hail is the culprit for a number of vehicle dents, broken flowerbeds and more. Driving in a monsoon can often feel more like being in a boat than a vehicle.

Be safe this monsoon season by following a few simple rules. The Arizona Department of Public Safety recommends a number of measures that can be taken during a summer storm. The most important thing to remember is to slow down. Vehicles have less traction on wet roads and slower vehicles will be able to slow down and brake much easier than faster vehicles. It is also a good idea to travel with your lights on during a monsoon storm, even if it's the middle of the day. This will make your vehicle more visible to other travelers on the roadway.

Be wary of hydroplaning while driving in a monsoon storm. Watch for areas of collected water and drive accordingly. It is also a good idea to check your tires and replace them if they are worn. Newer tires have far better road-grabbing ability than old ones. It's also a good idea to check your windshield wiper blades before driving in a storm. Don't forget the brakes, too. These should all be investigated prior to the onset of the summer monsoon season.

Never enter an area blocked by barricades due to flooding. Not only is it illegal, but also floodwaters can be tricky to navigate, as their depth can be deceiving. Floodwater can often move quickly and may be stronger than you think. It is always a good idea to give yourself a little more time when traveling and be ready for delays caused by storms. Extra food and water should be kept somewhere within your vehicle just in case.

Another facet of monsoonal storms, which many find less pleasant than the rain and lightning, is the windstorms that often rip through northern Arizona as a result of storm activity. DPS officials recommend a few precautions when it comes to blowing dust, such as not driving into a dust storm if possible. Drivers caught in blowing dust should always slow down and turn their headlights on. As can often happen, dust storms can worsen as one drives into it. Those who choose to stop and wait out the wind should never stop on the roadway itself, or on the shoulder. Pull off the shoulder completely and turn off all the vehicle's lights as you wait out the dust storm.

And, as always, wear your seatbelt at all times.