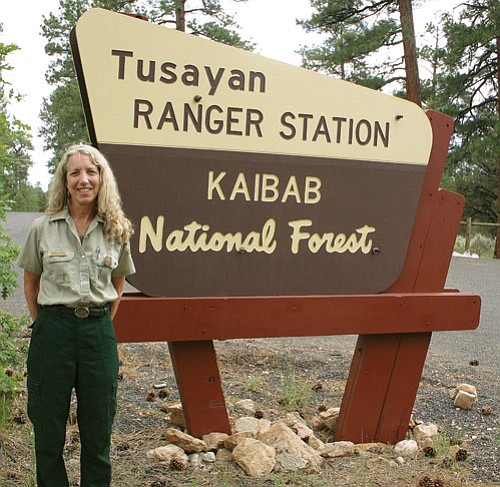 <br>Patrick Whitehurst/WGCN<br> District Ranger Angela Parker said she is looking forward to working in the Tusayan Ranger District on the border of the Grand Canyon National Park.

TUSAYAN, Ariz. - Tusayan's new District Ranger, Angela Parker, brings a wealth of experience with her as she takes over her new job on the border of the Grand Canyon National Park. Parker transferred to Tusayan from Portola, Calif., where she worked for the Plumas National Forest for four years. She has worked for the Forest Service, in various roles, for 29 years. Parker replaced former Tusayan District Ranger Rick Stahn.

"I'm really, really excited to be here, working with the National Park and all the people that are interested in the Kaibab National Forest," Parker said.

She said the role of the Tusayan District Ranger is that of a project manager, dealing with paperwork on a daily basis, meeting with Native American tribes and National Park Service officials, to acting as an agency administrator when it comes to fires within the district and helping with fun events as well, such as public appearances from Smokey the Bear. Zoned with the Williams Ranger District, there are currently around 20 employees based out of the Tusayan office, with another eight based in Williams.

"Very interestingly enough, the first day I arrived here we had a lightning storm, which sparked a fire," Parker said. "It started what we called the Ruby Complex. I worked with the National Park Fire Management and the Forest Service Fire Management to manage fires both on the Forest Service side and also the National Park side. It was really a good experience because I got to meet people right away and really establish a good working partnership early on."

Parker said the Tusayan Ranger District would be working on a number of important projects in the coming months, including fire management.

Some of the concerns over the Travel Management plan include questions regarding big game retrieval and dispersed camping, Parker said.

"I think what we're going to allow under this management plan is, if a person is able to shoot an elk and they need to go in, travel in, they'll be able to travel in one of these off road situations to retrieve that elk," Parker said. "The other thing that we have is dispersed camping. There's still going to be dispersed camping allowed in pre-existing dispersed camping areas."

Forest Service officials are also currently working on an environmental impact statement in regards to potential uranium mining in the area.

Besides being an avid hiker, mountain biker and cross-country skier, Parker also enjoys volunteer work. She's introduced herself to a number of the area's organizations, such as the local Rotary Club.

"I enjoy volunteering, I enjoy helping the community," Parker said.

She encouraged anyone who may have concerns or questions to give her a call at the ranger station at (928) 638-2443.

"I think one of the primary things for me, working as a district ranger, my foremost goal is keeping people safe and making sure the employees are safe in all the work they do out there," Parker said. "We do a lot that involves dangerous work."