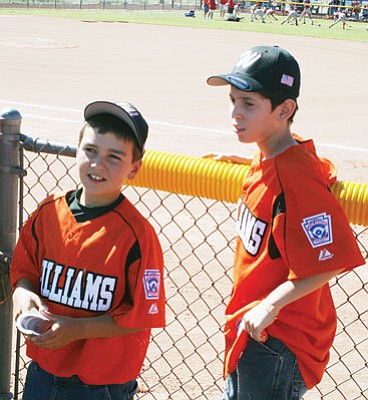 <br>John Christian Hopkins/WGCN<br> Colton Grantham, above, left, and Jose Acosta are all smiles as they await opening ceremonies for the District 10 Little League All Stars.

WILLIAMS - The District 10 Little League All Stars tournament is in full swing, with a trip to the July 20 state championships in Peoria waiting to be claimed.

Before the opening ceremonies at Cureton Park on July 6 hopes were high for the Williams 11- to 12-year-old squad.

Not 11-year-old third baseman Christian Ramirez who said he was relaxed, even though this was his first trip to All Stars.

He also thought his team would "probably" win its opening match.

Williams was set to play Verde Valley, which shut down Wickenburg 10-0 on opening day.

After team introductions the players, coaches and fans turned toward the flagpole in centerfield and sang the National Anthem.

Then the teams scheduled to play - Williams had a first-round bye - took the two fields and began their warm-ups.

The tournament is double elimination so a team doesn't go home until it loses two games.

Moments later a player from Chino Valley was sitting on the ground, surrounded by concerned coaches; the player had been chatting with another player and not keeping his eye on the ball - which hit him in the nose.

"You have to keep your eye on the ball," one of the Chino Valley coaches said. It was sound advice, if a tad too late.

Christian Plasencia played in his first All Stars game when he was 9.

The rightfielder took a more cautious approach toward his team's chances of success.

"We just want them to hustle," Bishop said. "There are a lot of kids out there and we're happy to see it."

As the Williams coaches gathered the team around them for a pep talk, one player asked if it was going to be an "expiring talk."

"No - inspiring," a teammate corrected.

Daniel Solberg, 12, will be playing in All Stars for the fourth time.

Solberg splits his time between pitching and catching.

Even though he has been to All Stars before, it never gets old, he added.

Williams assistant coach Juan Delgadillo told the players to look toward the third base coach after every pitch; the coach will give signs so the players know what they are expected to do.

Before the game, the players need to just relax and not run around, tiring themselves out, Delgadillo said.

When not playing, he urged the players to watch the other teams and look for weaknesses.

"They're ready," Delgadillo said. "They've been working really hard. We have a good group of kids."

Joe Otero - on hand to support his nephew, Rafael Duran - agreed with Delgardillo.

He knows talent, as he and Coach Kevin Perkins recently piloted the Williams 9- to 10-year-olds to a fourth-place finish in their tournament in Prescott Valley. Their team exited the tournament with a 3-2 record.

The kids are eager to learn the fundamentals of the game, Otero said.

Now attending All Stars as a coach, Delgadillo said it seems different than when he was a player.

"It's hard to believe you were ever that small," he laughed.

Otero, who played catcher and third base for Williams, also was a former All Star. He enjoys working with the younger kids and noted that most of them will be playing in this age bracket before long.

Hosting the tournament is a rare pleasure for Williams, Delgadillo said.

"This is probably the second or third time in the last 20 years," he said.

The coaches and umpires should be recognized for volunteering their time, Bishop said. "They do this for the love of the game, for the kids."