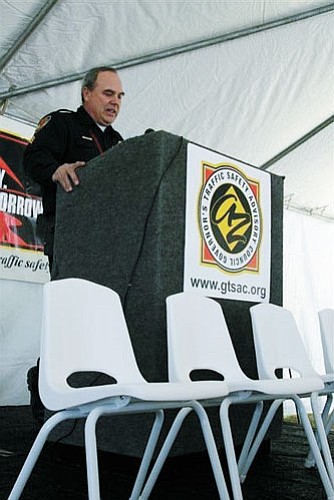 Photo/Ron Loar, ADOT Williams Police Sgt. Tad Wygal speaks to lawmakers and other guests about a tragic 2007 crash that claimed the lives of five young people, including teenagers. The empty chairs in front of the podium were placed in memory of the victims.

A statewide coalition of transportation and public safety organizations placed a spotlight Jan. 14 on the relatively simple actions drivers can take to dramatically decrease traffic fatalities and serious injuries on Arizona's streets and highways.

GTSAC held its fifth annual Traffic Safety Day event just outside the State Capitol with the theme "Every One Counts" as it works toward a goal of zero fatalities on Arizona's roadways. More than 30 safety partners and organizations displayed and shared their information with more than 50 state lawmakers, as well as reporters and other attendees.

Sgt. Tad Wygal of the Williams Police Department shared the effects a deadly crash had on his community when five young people were killed in September 2007, and steps the town has taken to help prevent future tragedies. For example, Williams has established a safety program in local schools. Wygal also pointed out five empty seats lined up in front of the podium while he spoke about the victims of the horrific crash, which involved speeding and impaired driving.

The Traffic Safety Advisory Council also established a larger display of 1,066 empty chairs on the Capitol lawn, in memory of the people killed in traffic-related crashes across the state in 2007. AAA Insurance was the title sponsor of this event.

• 336 people were killed by impaired drivers in Arizona in 2007 (31 percent of all traffic fatalities). Nationally, one DUI fatality occurs every 39 minutes.

• Young drivers in Arizona were involved in an average of nearly 10 crash-related fatalities or serious injuries per day (between 2001 and 2005).

"Every One Counts means each and every one of us has an opportunity, and a responsibility, to drive safely and prevent tragedies. Every One Counts when it comes to making a difference," said Mendez.

The GTSAC coalition supports passage of a primary seat belt law as a way to increase restraint usage while allowing the state to receive additional federal transportation funding. The group also touted the legislature's passage of Teenage Driver Safety Act, which went into effect last July and has safety-based requirements for young drivers to follow, including restricted driving hours and limitations on the number of passengers traveling with them.

During the safety event, the Phoenix Fire Department and partners performed an exercise in response to a staged traffic crash requiring victims to be extricated from vehicles. Also, the Automobile Glass Replacement Safety Standard's Council (AGRSS) demonstrated, by deploying airbags, how the windshield is part of the structural integrity of the vehicle and that it keeps the roof from caving in during a roll over accident and the occupants from being ejected during a head on collision. A student representative from Stay Alive Arizona also shared some advice for young drivers on distracted driving, especially the dangers of texting and driving.

For more information about the Council, visit www.gtsac.org.