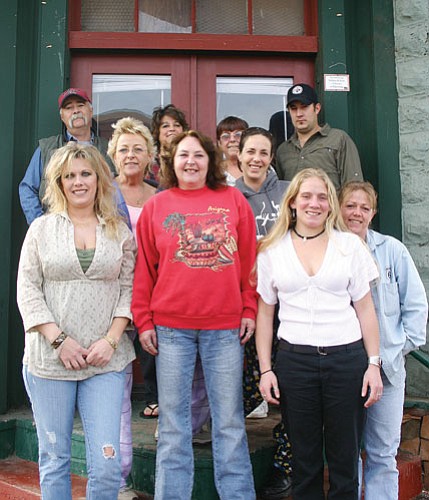 Patrick Whitehurst/WGCN Employees and owners stand on the front steps of the “World Famous” Sultana Bar Jan. 22. The bar was recently named as one the nation’s 15 best bars by ‘Gourmet Magazine.’

One of the city's longest lasting, and most beloved, fixtures earned national recognition recently when the Sultana Bar was named one of the best bars, not just in Arizona, but in the entire United States of America. "Gourmet Magazine" recently named the local Williams establishment as one of the best when it comes to American bars, based on bars that have been in operation for 60 years or more. The Sultana Bar has been in operation for 97 years. It opened in 1912. The bar also boasts the record of holding the longest continuous liquor license in the state of Arizona, according to owners.

"I think it's just a great accomplishment and a great honor also. We were really unaware of it until we found out from some acquaintances in Flagstaff. It's in the October issue of Gourmet Magazine, so we're trying to obtain that," said Teresa Stevens, who, along with husband Marc Stevens, owns both the Sultana Bar and the Canyon Club bar in Williams.

"We actually didn't know that they had done it until we heard about it from some friends and looked into it and then actually (a) Flag paper wrote a nice little article about it," said Sultana Manager Nick O'Neal. "It's pretty exciting to be one of the top 15 bars in the country out of Williams."

O'Neal said the bar has been a favorite among Williams locals since its inception.

"It's just a good old western bar," he said. "People come here to kick back and it's always been the place where people come to gather with their friends. We have wedding parties, birthdays here, retirement parties, wakes, it's just a good old authentic country bar. We have a clientele that definitely keeps us going. Whether they start somewhere else, if people bad mouth us or say something good, they always end up here. It is world famous."

Besides a number of parties, the Sultana Bar has also held city hall meetings in it's history, operated as a speakeasy during prohibition and became notorious when the first Williams police chief was reportedly shot and killed in the alley behind the bar. The Sultana Bar is located on the corner of Route 66 and Third Street in the downtown area.