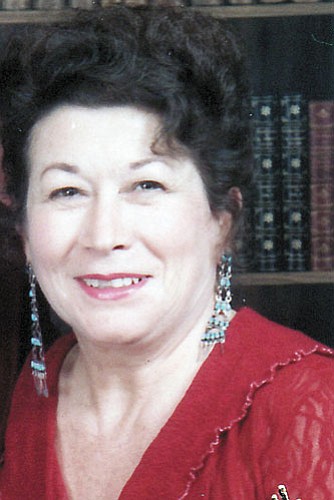 Born on July 5, 1915, Mrs. Irvin was the third child and second daughter of Della and William Craig whose family had resided in northern California for three generations. They moved to southern California in the early 1920s, where Mrs. Irvin completed elementary and high school and worked as a hairdresser during the Depression. There she met Glenn Irvin, who was employed by the Santa Fe Railway, and they married on Jan. 12, 1941. They resided in the Los Angeles area until 1947 when they relocated to the Bay Area, and subsequently came to Williams in 1953 when Mr. Irvin was appointed agent for the Santa Fe.

Mrs. Irvin led a lively, creative and social life in Williams. She participated in amateur theatre groups, school activities, bridge and quilting clubs. She was a championship golfer and lover of sports, and was the only woman to make a hole-in-one at the Williams Country Club. In recent years, she became a dedicated Diamondbacks and Suns fan, following the teams daily. She also loved her flower garden during the warmer months and enjoyed her many rose bushes.

Mrs. Irvin was known for her artistic skills. Her drawings and decorations were often part of community activities and productions. She worked in many media including tooled copper, enameling, knitting and crocheting, and silk screening, and was widely sought for her clothing designs and finished garments.

More recently she spent much of her time on quilting and was active in the local quilting society. When she moved to Williams, she became interested in the arts of the Southwest and its native craftspeople, and she was an avid reader and collector of books, crafts and movies, including those of her favorite western actor, John Wayne.

Mrs. Irvin was a member of the Community United Methodist Church for over 50 years and joined in its auxiliaries and activities. She served as Worthy Matron of the Williams Chapter of the Eastern Star in 1973, as Grand Chaplin of the Arizona Eastern Star, and as Grand Representative to national meetings in the 1970s and '80s. She was also active in the Rainbow Girls, acting as a Mother Adviser and sponsor. In addition to her many activities and accomplishments, Mrs. Irvin was loved and cherished for her dedication to her family, for her sympathetic understanding and compassion for those around her, for her eager willingness to join in projects that assisted others, and for her energetic and optimistic view of life.

She was preceded in death by her husband, Glenn, in 1998; her sister Philmer Synder; and brothers Noble "Bud" Craig and William Craig.

A memorial service will be held at the Community United Methodist Church in Williams at 2 p.m. on Saturday, Jan. 24, 2009.