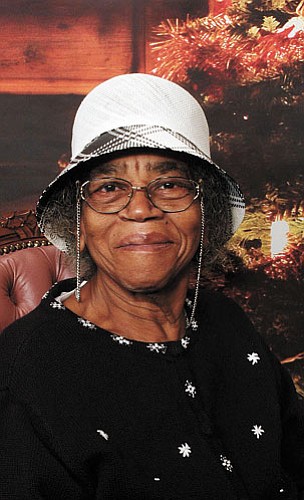 Mary Louise Jones Gray, 81, formerly of Williams, transitioned from this earthly world on Friday, Jan. 9, 2009, to her heavenly home surrounded by her children, grandchildren and great-grandchildren.

The sun rose and shined brightly on March 29, 1927, in Sallis, Miss. when a beautiful flower was born in the person of Mary Louise to Elijah and Nannie B. Jones. Mary spent her early years growing up with her siblings and attending school in Durant. She accepted Christ as her Lord and Savior at an early age and was baptized at the Macedonia Baptist Church, under the leadership of Rev. H.O. Rayford, serving as an usher and Sunday school secretary.

In 1960, Mary made a very brave move, bringing the entire family by Greyhound bus to relocate in Williams, where she joined her siblings Elnora, Ruby, Mack and their families. Williams would be home for Mary for the next 40-plus years. She joined the Galilee Baptist Church under the leadership of Rev. Luther Clayton. She was a faithful member serving in the Mission Circle, singing in the choir and when her health allowed, used her green thumb by planting flowers to keep the church grounds beautiful.

Mary was known in the community for her beautiful garden of flowers and vegetables. Mary spent many hours in her garden, which brought her much joy. She would have an infectious smile on her face as she shared this beauty with her family, neighbors and friends. She loved spending time and participating in activities with her many friends at the Williams Senior Center, sitting on her front patio relaxing, enjoying her neighbors and garden. She spent countless hours caring for her children, grandchildren and great-grandchildren. Although she was impaired in her speech, she was full of wisdom, very in tune and you could not fool her. Each generation very quickly learned how to communicate with her and knew just what she was saying.

In September 2007, Mary made her last earthly move to Phoenix to reside with her son Ben and to be close to the rest of the Gray clan. She became ill in February 2008 and for the next 11 months, fought a very brave and dignified battle. She always managed a smile in the midst of the pain - even making faces and laughing behind the doctors' and nurses' backs - and showing all those who came in contact with her just what a powerful woman of God she was.

Mary's life and legacy will live on in the hearts of her two sisters Lula B. Harrington of Waterloo, Iowa and Elnora Simmons of Williams; eight children Annie Pearl Easter of Phoenix, Ortha B. (Janis) of Harker Heights, Texas, Benjamin of Phoenix, Rosie L. Gray Brown of Flagstaff, Dock E. (Jacque) of Mesa, Manuel (Teri) of Mesa, Michael (Becky) of Queen Creek and Van Cunningham (Willie) of Casa Grande; 21 grandchildren, 37 great-grandchildren, numerous nieces, nephews and other relatives; and the Galilee Baptist church family, St. Agnes and senior center friends and the entire community of Williams and other northern Arizona communities.