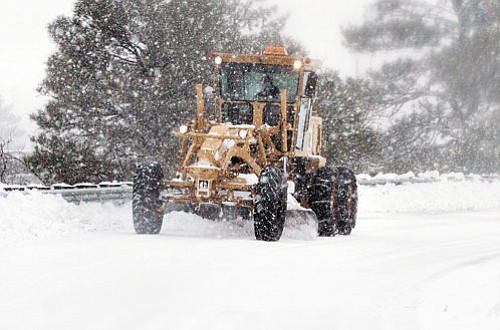 <br>Scott Warren/Williams Color Lab<br> Snow removal crews work to remove snow during the mid-December snowstorms that hit the Williams area with over four feet of snow in a little over a week and a half. Crews began working long hours beginning Dec. 29 to move the snow off the city roads completely and hoped to have the majority of the work done by today.

Williams Mayor John Moore met with Williams city staff members Dec. 29 in order to discuss the city's snow removal efforts. As a result of the meeting, Moore said snow removal efforts would proceed in a quicker fashion. Large piles of snow have remained on the city streets, including windrows in the middle of some streets, for a number of days following the recent storms, despite the efforts of the city's small snow removal crew.

Since Dec. 15, over four feet of snow fell within the city limits, including over two feet of new snow since Dec. 22, according to estimates from the Williams Water Department.

"I called a meeting with Joe Duffy, assistant city manager, and asked him to put the necessary things into action to get the snow cleaned up in the streets. That's going to require bringing in extra help, extra trucks, but it's something we must get done, because with these warm temperatures and cold nights, the snow is going to melt and we're going to have one big skating rink in the city of Williams if we don't get it cleaned up," Moore said.

Moore said he believed snow removal crews have been overwhelmed by the volume of snow within the city.

"City crews have done somewhat of an adequate job," Moore said. "They don't have enough manpower, enough equipment to do the job that I think needs to get done, so starting (Dec. 29) we will move forward and get it cleaned up, both the business district and the residential districts, as fast as we can."

Moore said that he has received numerous calls from senior citizens and from others who cannot clear snow from their own driveways.

"We're not going to clean driveways, but we will if they call and it's of a nature that they need to have their sidewalks, driveways cleaned where they can get out. We'll do that for them," Moore said.

This week's snow removal efforts may include the addition of outside help to quicken the pace snow is moved from the streets of Williams.

"What we do is we had a plan in effect that, if we need extra help, we get some of our local construction people that will come in and help move the snow, we've asked (the Public Works Director) to bring some of those in. We've asked for a couple of extra trucks, maybe from Flagstaff, whatever we need to do to be able to get the job done," Moore said. "You can look at it two ways: we can stretch it out over a week or 10 days and try to get it cleaned up with a small amount of help or we can bring in a large amount of help and get it cleaned up quickly. I prefer the latter, get it cleaned up quickly. It's going to cost us money, whichever way we go."

While the storms of mid to late December proved to be heavy producers of snow for the community, Moore said heavy snows are not new to northern Arizona.

"A lot of people talk about what a big storm we've had and it is a big storm, but it's not a big storm compared to some of the storms we had eight, nine, 10 years ago and even prior to that," Moore said. "I think sometimes we forget that we are in a mountain town and we do get big snows and big storms and we've probably just become a little complacent and forgot what a real big storm is like. There's not any weather forecast in the horizon until next Sunday. We've got a few days, but we've certainly got to have this stuff cleaned up and gone before, or in case, another storm comes in."