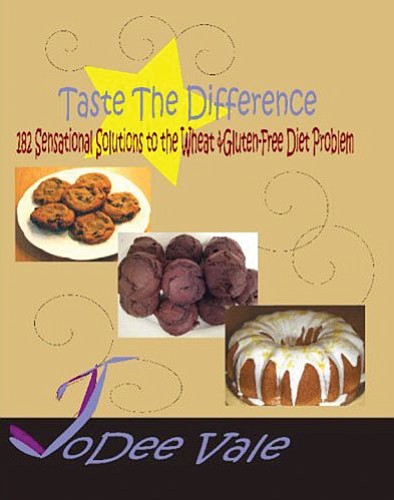 Former Williams local JoDee Vale has been researching and compiling recipes for years. These are not your average recipes, however. Vale's recipes offer a safe alternative for those with gluten intolerance and celiac disease. Diagnosed as gluten intolerant in 1994, Vale said she was urged by friends and family members to make her collection of safe recipes public.

Her cookbook, "Taste the Difference, a Gluten Free Cookbook" is currently available on Amazon.com and can also be purchased directly from the author. Wholesale inquiries are also welcome, Vale said. She can be reached at (928) 493-0725 or via e-mail at jodee_vale@hotmail.com.

"It took three years," Vale said. "I focused primarily on baked goods, because that's when people typically run into their problems. Those are the kinds of things people miss the most."

"Things that were family recipes, I adapted those. You'll find anything from fruitcake to different grains that you can use and substitute for wheat. I also have a chapter on making your own flour mixtures, so you can have your own ready-made mix. It allows more of a range for people so they can make what they want to make. I do have main dish meals and casseroles," Vale said, adding that people who have been recently diagnosed as gluten intolerant can often find the task of finding the right food difficult.

"It's overwhelming to see that diagnosis, because you're cut off from 90 percent of the things you see in the grocery store. For me it was frightening, because there was no real resource for me at the time I was diagnosed. I wrote this basically for my own survival," Vale said. "The publishing was sort of a secondary thing."

Vale currently works as a massage therapist. She said she performs many modalities of massage, cranial sacral bodywork and reconnective healing. Vale has been a holistic health advocate since the early 1980s. She currently lives, works and cooks in northern Arizona with her husband, Mark, dog Sombra and cat Chesalon. She operated a massage practice in Williams for five years.

"I'm getting a lot of feedback. Some of the people have responded to my sense of humor," Vale said.