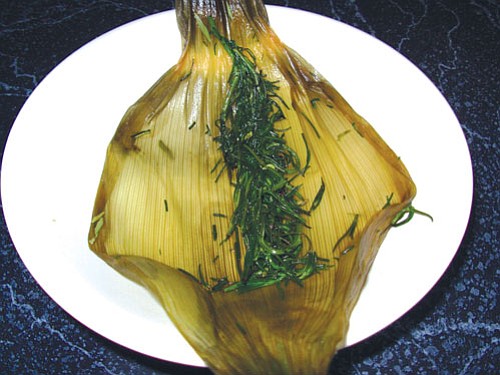 Russian thistle and other edible plants are highlighted in a newly-revised Hopi cookbook.

A group of agencies have released a newly revised Hopi cookbook that blends tradition with good eating.

"Noosiwqa" (food) preparation, origins, nourishment, medicinal uses, cultural exchange, gathering traditions, and how food is valued in Hopi culture is the focus of this new cookbook.

The first cycle of project funding (about $30,000) paid for interviews combined with census data of 100 Hopis from the reservation area to gather information on why and how often traditional Hopi dishes were prepared in an average Hopi household.

Additional information that proved extremely valuable in assessing how and when traditional foods were utilized is that of the 1,515 families living on the reservation who were surveyed, 574 were headed by single women.

About 260 of those single women households were also listed as living below poverty level, but still deeply valued traditional food as important and necessary for appropriate cultural participation.

For Hopis, food represents a wide variety of traditional custom observation as well as basic life sustenance, such as transfer of culture.

Special ceremonial foods at births, initiations and weddings along with the knowledge of how they are prepared are still seen as extremely important and highly valued.

Traditional value was also placed on the acknowledgement that the Creator provides such nourishment and that respect must be given for that food. Food is also seen as a medicine and should be shared.

With corn as the main basic food for Hopi, there are numerous ways it can be prepared, not just for ceremonial purposes, but for everyday consumption.

Corn that is ground both coarsely and finely is used for "hooma" in ceremonies and as corn meal for special ceremonial food preparation. Both blue and white varieties of corn can be used.

Care and respect must also be thought of when using these foodstuffs that honors your clan spirit and the sun.

Hopis are mindful to eat whatever is prepared without criticism, and that leftover food should not be thrown into the trash. If there are leftovers, they are given to the animals. Nothing is wasted.

There are continued Hopi reminders that food should never be prepared when angry and that sharing food generously is seen as an important life skill.

Finally, that appreciation for the food and the food preparer should always be acknowledged.

In the first of a series of public presentations by this cookbook partnership group, a workshop was held at the Hopi Wellness Center on Jan. 27 to over 100 attendees.

The two and a half hour presentation discussed the history of the Hopi cookbook project, health benefits of traditional foods by Kassondra Yaiva and Valerie Nuvayestewa and a cooking demonstration and sampling of one of the cookbook recipes by Iva Honyestewa and Harrissa Koiyaquaptewa.

Honyestewa was part of the Hopi Pu'tavi, Inc.'s group partnership. Pu'tavi was responsible for applying for the grant funding that made this cookbook revision possible.

Grant funding itself came from the Native Peoples Technical Assistance Office at UA under the direction of Claudia Nelson and Dr. Jay Strauss of the Native American studies program.

It's only been within the last 30 years that Hopis and most Native communities have been plagued by diabetes, high blood pressure and other heart related diseases.

Many now know that eating processed non-traditional foods as well as lack of daily exercise is the culprit.

By utilizing this new cookbook, everyone can get a heads up on learning new cultural plant knowledge, eating better without extra salt or sugar, and helping to sustain Hopi cultural tradition.