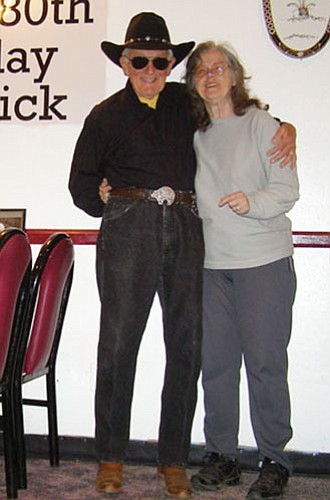 There were really two things to grieve at last Sunday's memorial service for Laurent "Maverick" and Shirley Gaudreau. One was the loss of a couple deeply woven into the fabric of the community. And the other, in the shadow of a tragedy still fresh and unexplained, was the sense of a pall over the many memories they left behind.

More than 150 people attended the two-hour service on Sunday, Feb. 15, 2009. As the Shrine of the Ages auditorium filled, the pianist played lighthearted tunes - a reflection of the family's wish to focus on the joyous way the pair lived, rather than how they died.

"Do not be mad at Maverick for doing this," said Shirley's daughter, Diane Caldwell. "I have forgiven him. I don't know why he did this, but I know he loved my mom. Please forgive him like I have."

Other family members - son-in-law Victor and grandson Shannon - echoed that wish. They also thanked the community for the outpouring of support.

The couple died early on Feb. 5, with Maverick shooting his wife and then himself. It was an action inexplicable even to the people who knew them best. Hiking partners who'd spent days with him in the Canyon didn't even know he either owned or planned to get a gun and there was no history of abuse.

As Grand Canyon Baptist Church Pastor Rick Wiles said, "It was completely out of character. We as a community should not be judgmental. Something snapped and something went wrong."

A 20-minute slide presentation focused on the Maverick and Shirley that South Rim residents and frequent Canyon hikers remembered.

A gregarious hiker, Maverick loved the corridor trails as much for the attention as for the scenery. He introduced himself to everyone, endeavoring to inspire them with his story, as well as to give advice on packing light. He prided himself on how little he could get away with carrying across the Canyon, but according to frequent hiking companion Linda Popp, he was aided by the fact that people felt compelled to give him food all along the way.

Shirley was remembered for a sense of humor described as quirky and ribald - so much so that she managed to scandalize Bill Brookins, who has 20-plus years in law enforcement, with an off-color joke.

"I'm harder to shock than most people, but after she left, I was sitting there, fanning myself and I asked, 'Did she just say that?'"

Wiles said that while the community wrestles with the big question - "in a three-letter word: WHY?" - answers won't provide the solace that people might want.

"Though we don't know the circumstances surrounding the why, those circumstance don't change what our job is now," he said. "Each one of us faces the same decision. What are we going to do with our lives from now on?"

He urged community members to write down their stories to put together in an album for the family, saying those memories over time better defined the couple's life than their last day did.

"If we let the tragedy consume us, the tragedy wins," he said. "Let's not let the tragic circumstances end the good that is laid down before us. One of the things we can do is honor them. We can try to do our best to make everyone's experience here a little better. I think it would bring honor to them, I think it would bring honor to our community."