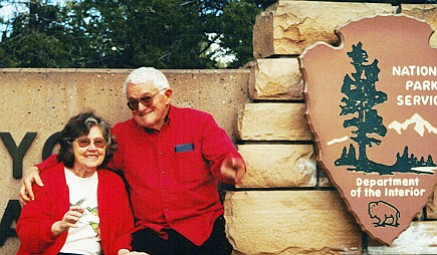 Laurent "Maverick" Gaudreau made the early-morning 911 call last Thursday that summoned rangers to his Pinion Park home, where the 82-year-old was found dead with his wife, Shirley, 73.

Grand Canyon National Park Public Affairs Officer Maureen Oltrogge said that by the time rangers reached the scene, no one was alive in the house. They summoned an evidence recovery team from Phoenix and in the meantime, they canvassed the area and questioned neighbors. Oltrogge said investigators took those steps out of caution, not because of any information in the 911 call or at the scene.

"We wanted everything done in the best manner possible," she said. "We didn't know whether or not something might be needed in court later."

Investigation pointed to Maverick as the shooter. The preliminary cause of death, according to the medical examiner's office, was gunshot wounds made by a rifle.

Patty Brookins, Retail Manager at Grand Canyon Association where Shirley worked, said they are making plans for a memorial service, though no time frame has been set. She said it is based on the family's wishes and when the medical examiner releases the bodies. Shirley's daughter, son-in-law and grandson are expected to be here next week, with Xanterra providing the rooms. Brookins said they have been unable to locate any family for Maverick.

"We think he might have an ex-wife," she said. "We don't think he has any kids. We never heard him talk about any."

The tragedy has been hard on the close-knit Grand Canyon community, where the Gaudreaus were embraced - Maverick for his eccentricity and refusal to act his age, Shirley for being a sheer delight. They were admired as a pair for their closeness and for having seemingly found their place and purpose in their later years. Maverick had logged thousands of miles below the rim, including 106 Canyon crossings in his 80th year totaling more than 2,400 miles. Shirley worked at a bookstore run by Grand Canyon Association, which supports the park through the sales of educational books and materials.

Their home in the Pinion Park housing area was a modest, single-wide trailer, neat, bright and cared for inside and out. They owned a reservation dog, Buddy, who was the subject of one of Shirley's columns. He was not harmed and is with a friend.

"The whole community is the kind of place were people wrap their arms around each other when something goes bad," said Brookins. "That's what's happening here."

Rick Wiles, pastor of Grand Canyon Baptist Church, has been providing grief counseling for Shirley's co-workers at Grand Canyon Association and former colleagues at Delaware North. He said he is available to anyone else in the community who might want to talk, as are other local pastors Jared Long of the Community Church and Debbie and Brian Fulthorp of the Assemblies of God.

He said that while people may not be able to make sense of what happened, they can work through their reaction to it.

"There may be no answers," he said. "Sometimes just talking through things, sharing and expressing how you feel can help you get through things."

His advice is to look at the couple's life in its larger context and not focus on its heartbreaking end.

"One thing we share as individuals is that we can make the choice - we can look at the last three or four days or we can look at how we knew them as a couple and remember that," he said.