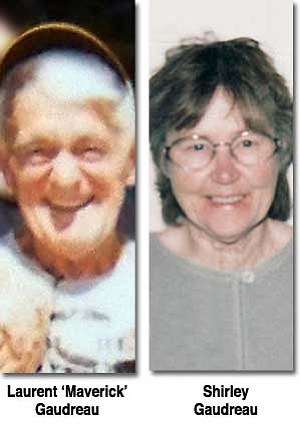 Laurent "Maverick" Gaudreau and his wife, Shirley were regular contributors to the Grand Canyon News and also maintained a <a href="main.asp?SectionID=109&SubSectionID=561&l=1"target="blank">blog</a> on this Web Site, grandcanyonnews.com.

According to park Public Affairs Officer Maureen Oltrogge, there was evidence of shooting and that "gunshot wounds or wounds" appeared to be the cause of death.

Maverick, who was originally from Massachusetts, moved to the Canyon 11 years ago. He'd been coming for infrequent hikes for about three decades when he encountered residents on the trail who told him about employment opportunities. He was hired as a server at Maswik Cafeteria.

Shirley had been here 13 years, coming from Fresno, Calif., following a divorce. She too worked at Maswik and, according to Maverick in a 2004 interview, "She chased me until I caught her."

Most recently, Shirley worked at Grand Canyon Association's bookstores, while Maverick pursued his hiking goals in the Canyon. They hiked together as well, until bunion problems forced Shirley to confine her walks to the rim.

The pair shared a regular column in the Grand Canyon News, Maverick focusing on inspirational topics and his struggles with self-improvement and Shirley chronicling life in Grand Canyon Village.

In 2004, when he was 78, Maverick set what seemed an ambitious goal - 30 rim-to-rim hikes in one year. Achieving that, in his 80th year he set his sights even higher, striving to complete one rim-to-rim hike for every year of his life. He finished with more than 100 crossings and for an encore had hoped to retrace Colin Fletcher's trek from Havasu to the Little Colorado and Nankoweap - a trip that would have required between $10,000-$20,000 in backing. He had one sponsorship with Go-Lite, a maker of lightweight camping gear, which was in line with his obsession with shaving as much weight as possible from his load. He was working with a Rhode Island teacher on a book about his life, with proceeds to go to a fund to help youth.

Laurent "Maverick" Gaudreau and his wife, Shirley, were regular contributors to the Grand Canyon News and also maintained a blog on this Web Site, grandcanyonnews.com.