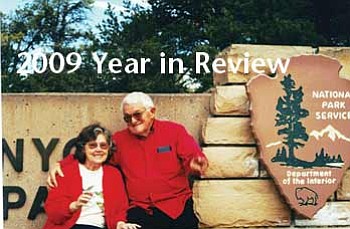 <br>Submitted photo<br> Laurent 'Maverick' and Shirley Gaudreau at the entrance to the national park,

More than 150 attended a two-hour service for Grand Canyon locals Laurent "Maverick" and his companion Shirley Gaudreau at the Shrine of Ages Feb. 15. The couple died early Feb. 5, with Maverick shooting Gaudreau and then himself, according to an investigation into the incident. The murder suicide left many in the Grand Canyon community shaken, while many said the shooting was quite "out of character" for the well-known Canyon icon. Many of Maverick's hiking partners were reported as saying that they had no idea he had plans to purchase a gun and that there was no history of abuse that they knew of.

Gaudreau was remembered by those who knew her as a having a keen sense of humor and bringing a sense of entertainment wherever she went. Maverick was well known for his hiking adventures and for acquainting himself with nearly everyone he crossed paths with at the South Rim.

The Feb. 15 service was provided by family members as a way to appreciate the two and not as a forum to discuss the incident itself. A pianist played lighthearted music during the service to reflect the family's wish to focus on the joyous way the couple lived and not on how they died. At the time of the service, Patty Brookins with the Grand Canyon Association urged those who knew the couple to write down their memories for inclusion in a family album that would be given to the family members. Both Gaudreua and Maverick were regular contributors to the Grand Canyon News.