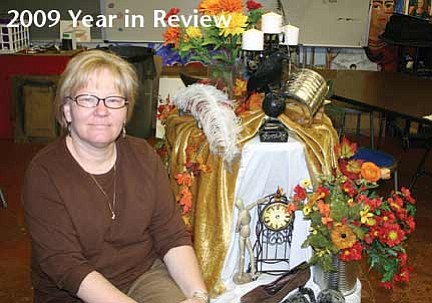 Allen earned a master's of business administration and a certificate in educational leadership from Northern Arizona University. She holds a bachelor of science in secondary education from Western Montana College. When not working, Allen enjoys fly-fishing, traveling and flying kites. The things she said she is most proud of in her career is the relationships she formed with teachers, steadfastness and that every location she has worked in the past has been fiscally sound.

Along with winning the honor, Grand Canyon School also received a check for $1,000 for the purchase of supplies in McBroom's classroom. She also received a personal honorarium of $2,000 and spoke at a national conference in Cincinnati, Ohio in October. McBroom's two daughters currently attend classes in the Grand Canyon School District. McBroom said she goes "full steam" into everything she does.

School officials at Grand Canyon also spoke about random drug testing for students in the district involved in extra-curricular activities during the 2009 portion of the new school year in October and November. School officials completed a draft policy on the subject, which could include those involved in sports, band camp and other activities should it be implemented. Three public meetings were held to gather public input on the matter. Meetings on the draft policy were held for student input as well, according to Grand Canyon School Superintendent Sharyl Allen. A final decision on the drug testing policy, she said, likely will not be made until the spring.