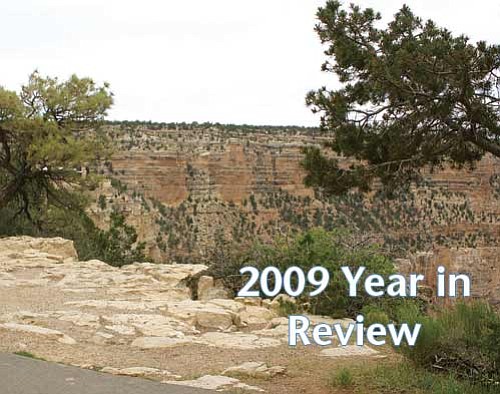 <br>Patrick Whitehurst/WGCN<br> Pictured is the area near the Thunderbird Lodge where a car drove over the edge on July 17. The vehicle was reported to have been driven by 57-year-old Gheorghe Chiriac of Apple Valley, Calif.

Search and rescue with the Grand Canyon National Park were kept busy during the summer months of 2009, as a number of emergencies were reported at the South Rim and other areas. One of the biggest stories occurred July 17, when Gheorghe Chiriac of Apple Valley, Calif., drove his rental car over the edge of the South Rim near the El Tovar Hotel. Upon arriving at the scene, park rangers found tire tracks indicating that a car had driven over the curb of the loading area between the El Tovar Hotel and Kachina Lodge. The tracks appeared on the lawn by the Thunderbird Lodge, where they veered into the Grand Canyon. Rescue workers retrieved the body of a lone male, 57-year-old Chiriac. His death has been ruled a suicide.

In April, emergency services responded to reports of three missing hikers on April 30, which resulted in the deaths of three young men on a day hike from the South Rim to Phantom Ranch. The three males, 16-year-old Mark Merrill, 16-year-old Saif Savaya and 22-year-old Joey Merrill, drowned after attempting to swim across the river near River Mile 88. Bodies for all three were eventually recovered from the river by search and rescue personnel. Search efforts included air operations, boat patrols, search dogs and other ground search efforts.

Other search and rescue efforts in the park included a search for 43-year-old Andrew Brunelli, who was reported missing on Sept. 5. Crews retrieved his body Sept. 9 in a drainage north of Tonto Trail, approximately two miles east of the South Kaibab Trail in the vicinity of Pattie Butte.

Stories from around the park

When it comes to the top news stories outside of the National Park, many consider the question of incorporation for the village of Tusayan to be at the top of the list. While the question of incorporating the area was voted down by voters in September of 2008, it returned again in July, when members of the Coconino County Board of Supervisors called for an election to be held on Nov. 3. A lawsuit filed July 17 contested that decision and parties in the suit agreed that an election should not be held on that date.

On Nov. 18, the group United For Tusayan returned to the Coconino County Board of Supervisors with six petitions containing 58 signatures. On Dec. 4, the Coconino County Recorder determined that 50 of the 58 signatures were valid. A determination by the Elections Office stated that a minimum of 25 signatures were needed for the petition to be valid. The Coconino County Board of Supervisors called for a new election during their regular meeting Dec. 15 and the matter is currently slated to return to voters during the March 9 election. This marks the third attempt for incorporation in Tusayan, according to election officials with the county.

County officials announced that the election would be held as a polling place election in late December. A polling location will be held at the Grand Hotel, located in Tusayan along Highway 64. Arguments "for" and "against" the ballot question are being sought for inclusion in an information packet, which will be mailed to registered households within the proposed boundaries. For more information, contact Recorder Candace Owens or Elections Administrator Patty Hansen at (928) 679-7860 or toll free at (800) 793-6181.

Valle also made news in 2009 when it was discovered that fill material there tested radioactive. The fill material originally came from an area near the Orphan Uranium Mine located within the Grand Canyon National Park in a road construction area. The fill material in Valle, cleared for sale, was to be used as part of a new parking lot for a hardware store in the Valle area. The material, which was also found to have been distributed to other areas, was eventually removed and stored in large bins for appropriate disposal. Some of the samples taken for the site tested high, according to reports released in August, but those high readings came from samples taken at the top of the piles of material, where ore the size of "tennis balls" was reportedly discovered. Roughly 10 piles of material were containerized and eventually removed from the Valle site.

Uranium mining was also the topic of a gathering held at Red Butte July 24-26. Red Butte, located between the Tusayan and Valle communities, is a sacred site for the Havasupai Tribe. A number of Havasupai tribal members, members of various organizations, and other notables were in attendance for the gathering, designed to collectively voice opposition to uranium mining in the area.

Officials from the Sierra Club, the Grand Canyon Trust, the Center for Biological Diversity and the Havasupai Tribe organized the gathering with the help of the Kaibab National Forest and other groups. The gathering was considered an important meeting for Native Americans, as a number of tribes from across Northern Arizona took part in the two-day event. The gathering also marked the first time in years that some members of the Supai Tribe came from the bottom of the Canyon. Members of the Tusayan Ranger District of the Kaibab National Forest, as well as Flagstaff Mayor Sara Presler and former Havasupai Tribal Chairman Rex Tilousi, were among those who attended the gathering.