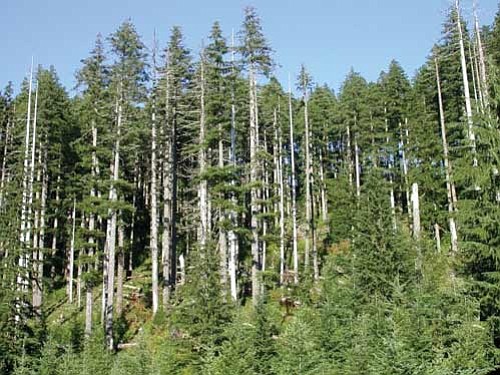 Almost all roads on the east side of state Highway 64 and south of the Grand Canyon National Park boundary, except for the area known as the Upper Basin north of the Coconino Rim, will be closed to motorized travel until conditions improve. Over-snow vehicles are exempt from the closure.

The roads on the west side of state Highway 64 south of the Grand Canyon National Park boundary remain open. However, conditions in many areas are treacherous, and forest officials urge extreme caution.

On the east side of state Highway 64, the area known as the Upper Basin north of the Coconino Rim, along with Forest Road 307, remain open to motorized vehicles with four-wheel-drive capability.

"There has been a lot of snow, and motorists have encountered extremely hazardous driving conditions," said Tusayan District Ranger Angela Parker. "While some areas of the Tusayan Ranger District will not officially be closed, it is important for forest visitors to be prepared for the worst."

All potential visitors to the Tusayan Ranger District should contact the district office at (928) 638-2443 prior to traveling in order to check current closures and conditions. As soon as conditions improve, forest managers will lift the temporary motor vehicle restrictions, and the roads will be reopened to motorized travel.

On the Williams Ranger District, Forest Road 76, which accesses the Spring Valley Cross-Country Ski Area and Spring Valley Cabin, is closed to all vehicle traffic including over-snow vehicles. Visitors accessing the cabin or the ski trail are required to park at the closed gate and walk or ski in.

Also closed to motorized traffic on the Williams district is Forest Road 111 from County Highway 73 to the top of Bill Williams Mountain.

For current closures and conditions on the Williams Ranger District, visitors should contact the district office at (928) 635-5600.

On the North Kaibab Ranger District, Highway 89A, which crosses the district from House Rock Valley to Jacob Lake, is open. State Route 67 between the North Rim of Grand Canyon National Park and Jacob Lake is closed for winter.

• Forest roads are not plowed.

• Plan your trip, check the weather before heading out, and be prepared for changing weather conditions and possible road closures.

• Make sure you have a full tank of gas

• Cell phone coverage is not reliable in many areas of the forest.

• Let somebody know where you are going and when you plan to be back.