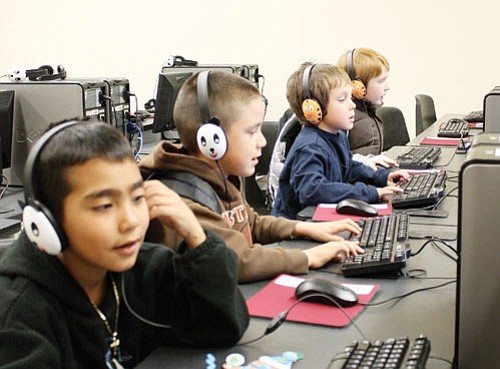 WEMS Principal Rachel Savage said that at the beginning of the school year she highlighted three goals for the year. The first goal was to create a safe, clean and positive learning environment.

"I think we have done that with our structural changes and building improvements that have been made," she said. "Our second goal was to improve the code of conduct of the students and we have a new Falcon Code of Conduct that I think is effective. The third goal was to improve academics across the board. To not only raise the AIMS scores but just increase student achievement in general across the board. This particular program that I want to highlight I think is a fantastic example of that third goal."

Savage said the Focused Falcons program will be an enhancement to the current 21st Century after school and Fridays program which is primarily an enrichment program.

"They're currently doing cooking and sewing and sports and theater and all of those sorts of things. This is going to be an academic intervention piece that is going to enhance what is already happening in the program."

The Focused Falcons program will take place on Fridays from 8 a.m.-12 p.m. at no cost to the families of those students who participate. The program is designed for students who need extra assistance with math and reading, are new to the state and might be first time Arizona Instrument of Measurement (AIMs) test takers or are English Language Development (ELD) students. Focused Falcons will provide one-on-one hands on, focused instruction with a certified teacher.

"There were probably about 10 teachers interested, so I was pleased with that," Savage said. "I think it speaks to the dedication of our teachers here. I think they really are vested in student improvement and I think they want to do whatever they can to help these kiddoes."

The Focused Falcons program will provide three hours of instruction along with time for breakfast and lunch. It will begin in January and end sometime in April just prior to the AIMs Test. Savage said the goal is to keep the instruction fun.

"We'll keep the program out of the box," she said. "There will be incentives and prizes and that sort of thing."

A combination of the 21st Century grant, Title I grant and the McKinney-Vento grant will completely fund the program at no cost to the Williams Unified School District.

"This is really a great situation because it costs the district zero," Hudgens said.