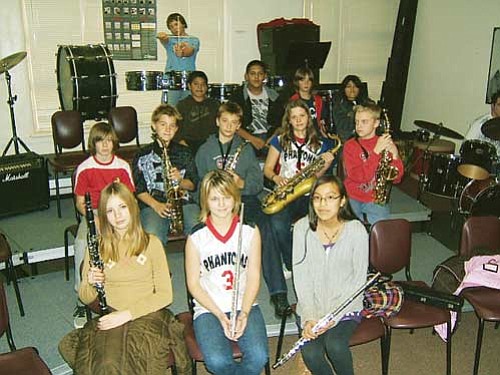 GRAND CANYON, Ariz. - High school and middle school students at Grand Canyon School are preparing for their annual Winter Concert Dec. 16 at the Shrine of Ages. The concert is set to begin at 6:30 p.m. It will include seventh and eighth grade band members, as well as members of the Grand Canyon High School band. The concert is free and open to the public.

A number of fun, musical treats are on tap for the highly anticipated event, according to school officials. Performances, under the direction of school band teacher George Haughton, will include a number of classic and newer favorites. Music will include Gershwin's They Can't Take That Away From Me, featuring Varsha Noda, Morgan Timeche and Katreena Haswood. Other tunes include The Bantu Walking Song, Beethoven's Turkish March, The Beatles' I am the Walrus, with Erik Vessey on vocals, Boots Randolph's Yakety Sax, with Chris Vessey on tenor saxophone, Hammond's Run, The Grand Canyon Phantom Fight Song, and My Favorite Thing, featuring Annabelle Morin, Shanaya Upshaw, Tateyonna Jeter and Shania Smith.

Another treat in store for this year's Winter Concert will be the return of the Grand Canyon School drum line, under the direction of student Erik Vessey. The concert will end with a special medley of Michael Jackson songs, specially arranged for the high school band.