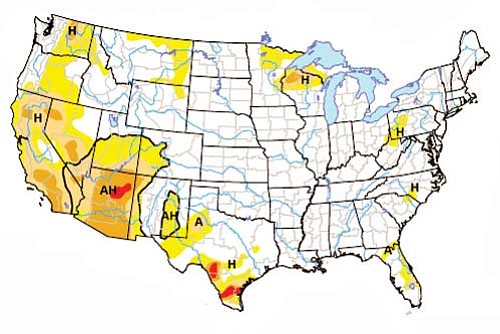 WILLIAMS - Drought conditions in northern Arizona may see a glimmer of hope in the coming months thanks to a moderate El Niño effect that may bring moisture to the Williams-Grand Canyon corridor as well as other portions of northern Arizona. This is good news for Coconino County and Arizona, as the area is experiencing its third driest year since the late 1800s, according to weather experts. The El Niño effect is expected to bring above average moisture to the region between the months of January and March.

George Howard, Warning Coordination Meteorologist for the National Weather Service in Flagstaff, said the outlook is currently shaping up for the arrival of moisture early in 2010.

In an area often plagued with drought, this may equate to a wetter than average winter across northern Arizona.

"Over recent years, things have been pretty dry across northern Arizona. Over the last 15 years, most places have really been suffering when it comes to a lack of precipitation," Howard said. "Over the last decade, many locations across northern Arizona have only received eight years of precipitation instead of the full 10 they would have expected."

The Williams and Grand Canyon area, he said, have proven to be something of an exception.

"The moisture shortfall over the last decade here has been quite small," Howard said. "Over a 10-year period, you're only about an inch and a half behind what you would expect for that decade."

He said the Williams-Grand Canyon area is currently running at about 62 percent of the area's normal precipitation levels for this time of year, however, which has spelled drought conditions for the area.

"We're suffering both agricultural and hydrological impacts from these drought conditions," Howard said.

El-Niño conditions arise when sea surface temperatures in the equatorial areas of the Pacific Ocean are abnormally warm, Howard said.

"El Niño is under way. It's been under way for a few months and, in fact, it's pretty close to peak right now. We would characterize the El Niño that we are experiencing right now as moderate. It just became a good, solid moderate throughout the month of October and on into November," Howard said. "We can expect the long term strength of that El Niño to stay in the moderate category."

A moderate El Niño, he warned, may not produce as much moisture as it could if the El Niño effect were higher.

"It looks as though we are going to see some benefits here," Howard said. "The greatest impact an El Niño has is through January and March."