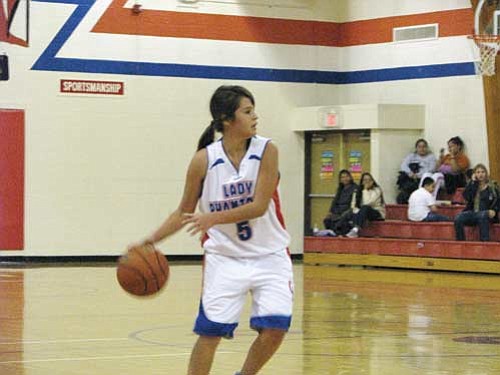 GRAND CANYON, Ariz. - The scrappy Lady Phantoms held their heads high despite splitting their four games of the recent Williams Holiday tournament, held Dec. 3-5. The Ladies began their tourney play Dec. 3, when they took on Chino Valley Tri City, taking the win in the game with a final score of Lady Phantoms 54, Chino Valley 8. Madison Berry had 14 points and Tiffany Kerr had 12 points to lead the way against an overmatched Tri City squad.

The Lady Phantoms went on to play Joe City in a tough overtime game Dec. 4. Grand Canyon came out on top in the end with a final score of Lady Phantoms 62, Joseph City 55. Berry had 23 points and Kerr had 18 points to lead a fourth quarter come-from behind victory against a tough Joe City team. Down by nine points in the fourth quarter, the Lady Phantoms turned up the intensity to pull out their best win of the season. The win pitted them in a rematch against Northland Prep in the semi-final game. Sadly, the rematch turned out much like their first meeting on Nov. 24. The Lady Phantoms came up short down the stretch in a tightly contested battle that went back and forth all night long.

The girls took on a tough Northland Prep team later that same day, taking a tough loss in the game with a final score of Northland Prep 37, Lady Phantoms 36. Once again Kerr led the way with 10 points against Northland Prep.

The match, held Dec. 5, saw the Lady Vikings take on the Lady Phantoms with a final score of Williams 52, Grand Canyon 38.

Seniors Kerr and Berry helped keep the Phantoms close with 9 and 8 points respectively.

"It was a positive weekend overall," said coach Dan Lopez "The Joe City game was real positive for us because we finished strong. But, we still need to improve on taking care of the ball."

The Lady Phantoms record goes to two wins and three losses on the season. They look to continue their success against Seligman at home on Friday. All fans will receive a complimentary red towel in the Phantom's annual "See Red" day. The Lady Phantoms also play Saturday at home against White Cone.