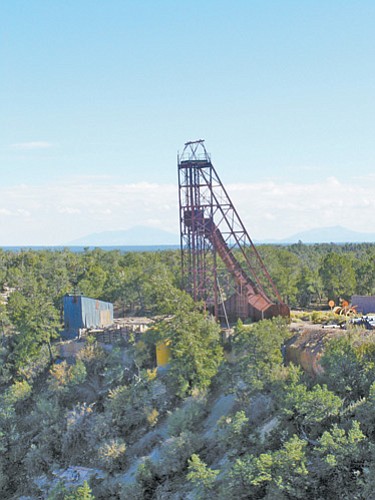 <br>Photo/GCN<br> The head-frame at Orphan Mine, pictured above, was recently dismantled as cleanup efforts at the South Rim property continue.

GRAND CANYON, Ariz. - New Orphan Mine administrative files are now available for public review, according to officials at the National Park Service. National Park administrators have updated their records on the cleanup effort of the South Rim mine and have made those records available to the public. Records in the administrative file include an engineering evaluation/cost approval memorandum and work plan for Operable Unit 1, upper mine area, comments submitted by interested persons, and a number of site investigation reports.

Greg Nottingham, CERCLA project manager with the National Park Service, said officials plan to update the Orphan Mine records on a frequent basis.

"This is simply an update of documents that goes through Dec. 2008," Nottingham said. "That catches us up and is the first supplement to the administrative record for Orphan."

Files contained in the administrative record would be used to determine a proper response action at the Orphan Mine, officials said. Additional files are also expected to be added as investigations continue at the site.

"We'll update the record periodically. We did have a lot of activity in 2008 and 2009. That was all related to the man-made features removal, which was the first phase of the engineering evaluation/cost analysis for Operable Unit 1, which is the upper mine area. That occurred from Nov. 21008 to March 2009," Nottingham said.

The cleanup effort at the Orphan Mine is being performed pursuant to Comprehensive Environmental Response, Compensation and Liability Act (CERCLA). Park officials are working with CERCLA authorities to ensure that all risks at the site are properly addressed and that those parties responsible for the location meet their legal obligations. The cleanup effort covers areas of the park contaminated, or suspected of being contaminated, by hazardous substances released during the mining operations. Uranium was typically mined from the site between 1956 and 1969, thanks to a 1906 patent that predates the establishment of the Grand Canyon National Park.

Recent work at the site, according to Nottingham, has included the removal of the 80-feet head-frame for a hoisting mechanism at the site.

"That resulted in removing concrete slabs, a lot of debris, a lot of remnant metal. The head-frame also came down in that activity," Nottingham said. "Everything associated with that activity and completion of that activity would be in the next update."

Officials said a formal public comment period would be held upon the publication of an engineering evaluation/cost analysis. The analysis is tentatively scheduled to be completed in 2011. Informal comments on the project are welcome at any time. Comments on the file can be submitted to Shawn P. Mulligan, National Park Service, 1050 Walnut Street, Suite 220, Boulder, Colorado 80302.