Editorial: Orphan Mine has a long history at the Canyon 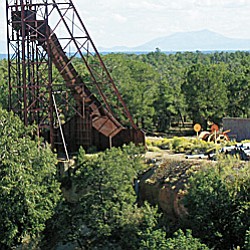 Located roughly two miles from the South Rim Village area, the Orphan Mine has had a long history in the Grand Canyon area, one that continues to grow as cleanup around the site moves forward. Park officials have recently added to the documents for Update No. 2 of the Administrative Record File for the Orphan Mine site. The public is encouraged to review these documents in order to stay informed on what's going on in the area.

The mine is located between Maricopa Point and the Powell Memorial. Portions of the Rim Trail detour around the site. According to historical records provided by the National Park Service, the mining claim for the site was filed in 1893. The 20.26-acre property was surveyed around that same time. The land itself extends approximately 500 feet south of the Rim and Roughly 1,100 feet below the South Rim. Periodic mining through the 1950s produced copper and other minerals. In 1951, geologists determined that high-grade uranium deposits were also present at the Orphan Mine.

A number of buildings and structures were built at the Orphan Mine in the 1950s, which included a three-tower aerial tram system, used to haul ore from the lower mine to the upper mine. The system was later replaced with a hoisting shaft. The shaft's 80-foot tall head-frame remained in place until 2008. By 1962, new legislation came along that required that site mining activities end by 1987. Mining at the Orphan Mine ceased by 1969. Waste from the mine, however, is still present in the area today.

With waste present at both the upper and lower mine, as well as on the slope leading down into the Canyon, National Park officials were forced to put a number of safety measures in place to prevent unauthorized access into the area. Fences surround a large portion of the area, preventing exposure to radioactive waste and other potentially contaminated waste areas. Signs are also located in the area of the Horn Creek drainage, warning visitors to the area not to drink the water due to the potential of high radioisotope levels.