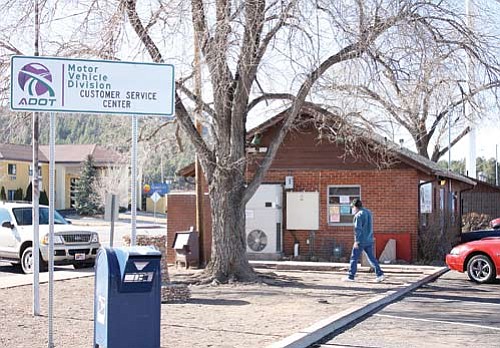 <br>Ryan Williams/WGCN<br> The Williams Motor Vehicle Division office will likely close due to lack of funding. The Arizona State Legislature has diverted approximately $500 million away from transportation.

WILLIAMS - Due to the state budget crisis, residents of Williams will likely be traveling to Flagstaff more often in the future. The (ADOT) Motor Vehicle Division plans to close the Williams MVD customer service office along with 11 other offices state wide.

ADOT is facing a $100 million budget shortfall due to significant declines in vehicle license and gasoline tax revenue along with $500 million in transfers by the state legislature away from transportation into the state's general fund.

Doug Nintzel, ADOT Media Relations Spokesperson, said an exact date has not been set for the closure of the Williams office. Because MVD offices also provide voter registration services, the U.S. Department of Justice is currently reviewing the closures to determine if they comply with the Voting Rights Act of 1965.

"We can't predict how long (that review) will take. I can't speak for the Justice Department quite honestly. Technically these are proposed closures," he said.

Nintzel said ADOT has attempted to steer the state legislature away from extensive transportation related cuts.

"In following the circumstances surrounding the state's budget crisis, we've tried to warn lawmakers that a reliance on transportation funds to help with the overall state budget deficit would lead to decisions that impact customers," he said. "We can't use dedicated construction funds for MVD and highway maintenance purposes so, we've made difficult choices that affect MVD staffing levels. Unfortunately, office closures go hand in hand with a reduction in the number of MVD employee positions."

Locations identified for closure have been evaluated based on the number of customers served, review of the facilities and the availability of alternative service locations including other MVD offices or third party locations.

Nintzel explained that the Williams office is a leased building and has been criticized over time for being inadequate. The office averages approximately 975 customers per month with one full time employee on staff and back up help traveling from Flagstaff.

"We don't want to do these things but the current budget situation forces these tough choices," Nintzel said. "Specifically as to the Williams office, it's a difficult decision. We don't want to tell the residents in Williams that they're going to need to drive to Flagstaff to take care of MVD business, however, we're in a difficult position and right now we had to make a choice and identify 12 offices around the state for closure."

According to a press release from ADOT Community Relations Project Manager Don Cassano, ADOT continues to search for alternative funding sources including federal money for construction work. However, use of these federal funds is restricted and cannot be applied to MVD office operation or highway maintenance.