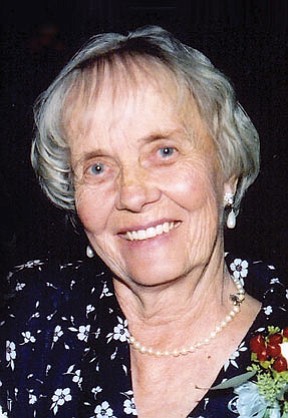 Shirley Mae Hillman was born on Jan. 17, 1929 in Lombard, Ill. to Arthur and Evelyn Hillman. Shirley lived in Lombard until she graduated high school. Shirley then moved to California where she worked in Hollywood at the famous Eddie Lewis clothing store.

Shirley met Lambert "Bert" Hodgkins and married on July 8, 1956 in Tucson, Ariz., where Shirley's parents lived. Shirley and Bert soon added to their household two girls, Carol and Susan. Shirley and family decided that they did not care for the fast pace in California and moved to Tucson. Soon Tucson grew too much for Shirley, so in 1971 Shirley and family moved to Williams, Ariz. where they opened the "Williams Flowers and Gift Shop."

Shirley first worked at the Williams Chamber of Commerce and then later worked for Dr. Biswanger and Dr. Bates where she retired as a receptionist/medical assistant.

On May 12, 1998 Shirley married Jack Gamboa. They spent their summers in Williams, their winters in California.

Shirley was very involved in the community events and with ESA, and 4-H (sewing). Shirley's hobbies were bowling, fishing, and camping (telling stories around the campfire). She enjoyed time with her daughters and families.

Shirley passed away Friday, Aug. 21, 2009 in Flagstaff, Ariz. with her family by her side.

Shirley is preceded in death by her sister Lorraine and husbands Bert Hodgkins and Jack Gamboa.

Services will be held at the Community United Methodist Church, Thursday, Aug. 27, 2009 at 2 p.m. in Williams, Arizona.

Condolences can de sent to her family through www.norvelowensmortuary.com.

Arrangements are under the direction of Norvel Owens Mortuary.